You are here: Home / hockey / Two Players Away From Perfect Line Combiinations 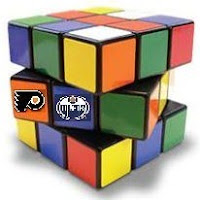 Will they, won’t they, who goes, who stays…

How about a slightly humorous look at something to lighten the mood for just a second.

Much has been made of coach Terry Murray’s Rubik’s Cube like changes to the line combinations.

Yet, the Kings may just be two players away from the perfect solution.

If they could somehow acquire players with current or former ties to the Flyers and Oilers, they would be able to suit up the following:

Of course, the only problem in the above scenario is Kyle Clifford is missing on the Kings line. So, change that one to Clifford-Kopitar-Brown.

Obviously, Dustin Penner and Ales Hemsky of the Oilers have been mentioned as possible targets for LA – making the Oilers line a realistic possibility.  However, every good GM needs a back-up plan.  If either deal isn’t viable, they could instead change things and go with an Avalanche line of Smyth-TBA-Richardson.

Paul Stastney would fit the bill.

Sorry Alexei Ponikarovsky. You just don’t have the credentials necessary under any configuration.

Now, what player with a Flyers connection could GM Dean Lombardi target to make this dream come true?

[note: for a more serious look at the Kings trade scenarios today, CLICK HERE – see who may be leaving and what they’re looking to acquire]