You are here: Home / hockey / Tony Granato on the LA Kings and GM Dean Lombardi 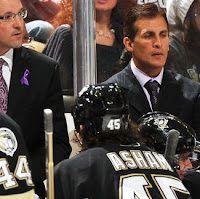 On January 20, 1990 the Kings traded away one of their most popular players, Bernie Nicholls, to the New York Rangers. In return they received Tomas Sandstrom and Tony Granato.

Even though it hurt to lose Nicholls, it might have been one of the best trades the organization made during that era. In return they received a double dose of grit and skill that helped fuel the offense for many seasons ahead.

Upon retiring, Granato moved behind the bench. After first spending time with the Colorado Avalance, he’s now an assistant coach with the Pittsburgh Penguins – who are led by Dan Bylsma, another former LA forward.

Still, Granato’s ties to the Kings aren’t exclusive to those early ’90s teams. He was also recruited by then-GM Dean Lombardi to play for the San Jose Sharks following the ’95-96 season.

[note: the podcast with Granato is available here]

MM: What were your impressions of Dean Lombardi when you signed with the Sharks in the summer of ’96?

TG: I remember going into that period – coming off the injury where I wasn’t sure if I was going to get clearance to play again – the thing I talked to my family and friends about was wanting to go a place where I had a chance to win. And the last place in the world at that time I thought I would go to would be San Jose. If I had to guess, I think they were last in the league the year before. I don’t know for sure, but I know I said ‘There’s no way I’m going to go to San Jose.’ I had known Dean through the hockey world for a few years and he said ‘Just come out and see what we have to offer here. Let me show you around town and let me show you where we’re trying to go as an organization.’

I hemmed and hawed, I didn’t want to go there. I had three teams in my mind where I thought I’d like to play and like to maybe finish my career. I was talked into it by Dean to come out there and when I got there he laid out his game plan of what he was trying to do and where he was going. He wanted me to be part of it. He really showed me that he had a lot of confidence in me and the role he was going to put me in. But, he also showed me the direction he thought the team could go to in a few years.

So, that was a new challenge. I was going to a team where I would be a player that was supposed to provide some leadership and go through some growing pains with some young players, while we implemented some new stuff in the organization. I accepted that challenge and it was great. He lived up to what he said he would do, as far as how he would build that team. He built it into, all those plans and pieces that he put in place way back then is what San Jose has lived off of since those days. That’s why they’ve gotten pretty close to the top of the league – as far as being a consistent winner. It’s because of the plan he put in place back then. So, I do believe he’s done most of those things in LA and they’re close to being an organization that will be fundamentally sound for a long time.

MM: When you were part of the Kings they were often joked about being the Oilers-South. Did you ever sort of feel like some of those Sharks teams were the Kings-North (they featured Granato, McSorley, Hrudey, Nicholls…even Barry Potompski at one one point)?

TG:  There were quite a few guys that went from the Kings up to San Jose. It’s always fun going through new experiences and having old teammates that you respect join you in a new environment like that. Most of us were brought in there for leadership roles – not that we were past our prime. But, we were brought in there for different reasons than just necessarily what we brought to the organization on the ice. I think that was an impact that Dean on, trying to change the culture there and the environment. Like I said, I think he did a great job in doing that.

MM: After your first season in San Jose you were awarded the Bill Masterton Trophy (given to the player who best exemplifies the qualities of perseverance, sportsmanship, and dedication to hockey) after coming back from a serious brain injury. Although unrelated, that’s still quite an honor for a guy who just a few years earlier was perhaps public enemy number one when you received the 15-game suspension for injuring another player. [note: in February 1994 Granato received one of the longest suspensions in NHL history for slashing Chicago’s Neil Wilkinson in the head]

TG:  The suspension and the way I played, whether you call it grit or being dirty or somewhat borderline, whatever – I had to play with that edge and I made a mistake. I was suspended for the incident and I do regret it. But, I don’t go back and try to change what had happened or how I played or how I looked at it. I made a mistake and I paid the consequence for it. I hurt my team by missing the 15 games at that time. The things that happened two years later, they’re totally unrelated. What you want to remember when you’re done playing is hopefully that you left it all on the ice and you that you played as hard as you could for as long as you could. Sometimes, things don’t go the way you planned or you make mistakes. That incident was a mistake. You just live with it and move on and look forward to hopefully having better days in front of you.

MM: For teams in opposite conferences, the Kings and Penguins seem to be developing a nice little rivalry the last few seasons. At a high level, how do you see things?

TG: They’re both young, skilled, talented teams. You look at the young, skilled players they have on their side and you look at our guys – it’s going to make for an exciting game. Whether it be in February or an exhibition game, in LA or in Pittsburgh, when you get that much talent on the ice at the same time you can expect to see some pretty exciting hockey. So, that’s what I expect we’ll see and the fans should enjoy it.

MM: Like this season, the two teams met only met once last year.  Looking back on that game were there any specific players out of LA’s ‘young, skilled’ group that impressed you most?

TG: I like their team a lot. Doughty for sure, he’s the guy that’s made the biggest impact in the shortest period of time. You have Kopitar and Brown and all the other talent around them. I really believe that team is not far away from being a team that can compete for a Stanley Cup. Are they like Chicago was, maybe two or three years ago? I think they are. So, potentially, if they can add the right pieces, if they can develop in the way they potentially could, they could be a team in the West that has similar results to what Chicago had.

We’ll have more with Granato up soon – including his thoughts on the 1993 Stanley Cup Finals, his career highs and lows…plus, yes – a MayorsManor favorite – we’ll play word association using many of his former teammates.

[update: all of that and more appears in the podcast with Granato, which is available here for free]