You are here: Home / hockey / Reminiscing with Westgarth’s Princeton Teammate 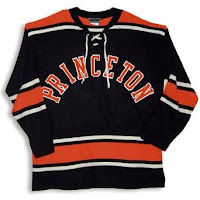 Daryl Marcoux is a 5’10” defenseman who played his college hockey at one of the finest learning institutions on the planet, Princeton University.

These days, he finds himself patrolling the blueline for the ECHL’s Stockton Thunder.

With no disrespect to Nick Diaz and his 209 pride, that’s not exactly a step up in the world.

Still, he’s ‘living the dream’ as they say and remains optimistic about the future.

He was in town Wednesday night to play the Kings’ ECHL affiliate (Ontario Reign) and after the game I caught up with him to talk about his former teammate Kevin Westgarth.

MM: Overall, is the Westgarth we see now similar to what you remember?

DM: In college everybody wears cages, so there’s not a lot of fighting, not a lot of toughness. He definitely hit like a truck. He actually put up quite a few points, especially his senior year. He has an amazing slap shot and he actually has quite a bit of skill – as I’m sure people aren’t quite aware of yet. I think as the years progress in the NHL he’ll get his shot to move up into maybe a little bit different of a role and maybe play a tough guy role who plays on the third or second line.

MM: OK. How about off the ice, was he as quotable then as he is now?

DM: Definitely, very outspoken. Everybody got a great kick out of him. He’s a very, very intelligent guy. He keeps you sharp and keeps you on your toes. It was a pleasure to play with him for four years.

DM: I can’t think of anything specific off hand. We took a couple of trips to Cancun and Ft. Lauderdale together. But, nothing too funny.

MM: Were you guys living on campus or off campus?

DM: Everyone lives on campus. Your junior and senior year you get to chose who you room with. Before that you’re with whoever. So, all the hockey guys weren’t necessarily together – which was good. I was lucky enough to room with Westie my sophomore year. We had ten guys in one room. That was quite an interesting year.

Ten guys in one room? And he couldn’t think of anything funny?

You so haven’t heard the last of this.