You are here: Home / comments / Ponikarovsky’s Points and Westgarth’s Fists 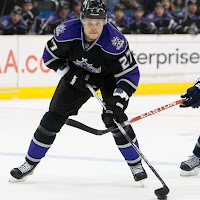 One of my favorite quotes from a Kings player as they wrapped up practice last week in El Segundo (before heading out on this six game road trip through the Easter Conference) was Alexei Ponikarovsky saying “I think all the teams we’re going to play on this trip are pretty good teams. So, it’s going to be a tough one. We just have to bring a good game as a group and win them all.”

But, what about today’s game with the Islanders? After all, New York has been hovering around the bottom of their conference all season. Plus, the Kings have already played powerhouse teams like Pittsburgh and Washington on this stretch.

Could this be one of the oft-talked about trap games?

Ponikarovsky had a few things to say about that notion…

“That game is not a tough one because mentally you know (it’s) the last game of the road trip. If you won the previous five, you just keep the streak going. If you didn’t get enough wins, you’re going to battle harder to get that one. The mindset has to be it doesn’t matter who you play against, just get points.”

And that they’ve done – so far.

Can they do it again today?

Well, not only will the offense need to rise up and score some goals, Kevin Westgarth and Kyle Clifford will more than likely be called into action.

Overall, the Islanders have been a little feisty lately, while going 6-3-0 in nine games this month. Plus, Zenon Konopka may enjoy a rematch with Westgarth of their November 13th fight at Staples Center (video here). Westgarth also squared off with Matt Martin in that game (video here), something that can’t happen again tonight, as Martin is currently serving a four game suspension.

In their initial meeting the Kings won 5-1 on goals from Anze Kopitar (2), Justin Williams, Dustin Brown and Drew Doughty.

An offensive explosion of similar sorts would be a welcome treat for a club that’s played six overtime games during their recent 8-0-3 hot streak.

Although, the Islanders did net nine goals on Pittsburgh last week and seven on Buffalo. So, five goals may not be enough for LA in this game.

REMINDER – all shirts and hats in the MayorsManor store are on sale this weekend for 20% off, including the I Love LA (hockey edition) and In Dean We Trust shirts…plus, the all new MUST WIN hats. Use code FFHSPRESIDAY at the store here.