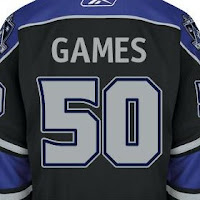 It’s not uncommon for coaches to break the NHL season down into 10-game segments. Things are just easier to digest that way.

Last year there were several articles on MayorsManor that followed the progression of the Kings throughout the season using this simple approach – which also helps even out the highs and lows that may come with a few wins or losses.

Given the strength of the Western Conference this year, 96 points is a good benchmark to use when drawing a line in the sand to determine a minimum number of points needed to make the playoffs.

For easy math, that means a team needs to average about 12 points per 10 games (using eight ten-game segments you’d get 96 points, then use games 81 and 82 for seeding purposes).

So, where are the Kings? And more importantly, what’s needed on the current road trip?

Thus, after 50 games they should be starting today with 60 points. Instead, they enter play with 55 points.

Assuming they’ll need to make up that five point difference somewhere along the way, it would be wise to not ask for it all at once. Instead, make up roughly half – say, three points in the next 10. So, the 10-game road trip target is…15 points.

Before we continue to look forward, how about a quick look back to last season – through 50 games the Kings had 59 points via a 28-19-3 record. By comparison, they’re sitting at 27-22-1 right now. Yes, a difference of only one victory. Pretty hard to fathom when you think about the ups and down of this season.

As a reminder, they went on to finish last season with 101 points. So, shooting for 96 this season is more than feasible.

In fact, it’s asking the team to perform at the exact same level they did last year over the same time period (41 points).

What’s ahead this time around?

In the remaining 32 games of the regular season they’ll play 13 games against the seven teams they’re most likely challenging for a playoff spot. This excludes Vancouver (2 games remaining), Detroit (2 games) and Dallas (3 games). Wins against those teams will be important for the two points, but probably won’t knock the big three out of contention.

Don’t fall into the trap of thinking the division games are more important though. They aren’t at this point. Realistically speaking, the Kings aren’t going to catch the Stars for the division title. Thus, it’s games against that entire group that are essentially like ‘four point’ match-ups at this point.

If recent trends mean anything, February could/should be their month too. The Kings were hot in October, cool in November. Hot in December, cool in January.

Heat up again and GM Dean Lombardi will most certainly be a buyer at the trading deadline (coming up at the end of the month), providing roster reinforcements that should help them over the final six weeks of the season – continuing that playoff push.