You are here: Home / hockey / No Hollywood Script for Brayden Schenn’s Return 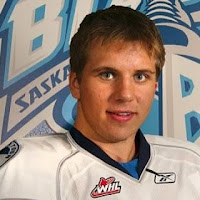 Five different teams and over 100 different teammates, yet when it was all said and done Brayden Schenn found himself back home again – in Saskatoon, Saskatchewan, Canada.

The former NHL first round draft pick started the year in Los Angeles with the Kings. Since then, as has been well documented here on MayorsManor, he’s played in the AHL, at the World Junior Championships and ultimately was traded.

On that day he was shipped from the Brandon Wheat Kings (WHL) to his hometown Saskatoon Blades.

As luck or scheduling would have it, the two teams were set to meet the very next day. However, due to a should injury, destiny would have to wait…until last night, when Schenn’s new team traveled to Brandon to take on his former club.

The Blades were riding high, winners of 11 straight and undefeated with Schenn in the line-up. Meanwhile, the Wheat Kings were rebuilding after hosting the Memorial Cup last season.

Brandon had won the first match-up between the two teams 7-0. Saskatoon had won the next two. Schenn didn’t suit up for either side in any of the three.

Prior to the trade Schenn had played 197 regular season games for the Wheat Kings over three plus years. He had since played 11 games for the Blades, scoring 10 goals and collecting 14 assists.

While the Blades may have the best record in the WHL, they weren’t the best team Tuesday night.

Eager to show that they still had some fight left in them, even though they had lost their best player – and perhaps the best player in the WHL – the Wheat Kings downed the Blades 7-4.

The fans in Brandon got to go home happy, as they were able to see their former hero once again and the hometown team picked up the win.

So, maybe it was like the script said – just that nobody checked to see the writer was from Brandon.

Let the closing credits reflect that Schenn finished the night with three assists and was a minus-2 in the loss.

The teams will meet four more times before the season concludes, playing twice each in Saskatoon (February 23, 25) and Brandon (March 9, 11).

Tonight Schenn will turn his attention from former teammates to a possible future one.  The Blades will be home to take on the Medicine Hat Tigers, who feature Linden Vey – the Kings 2009 fourth round draft pick and the WHL’s leading scorer.

Local (audio) interview with Schenn prior to the game