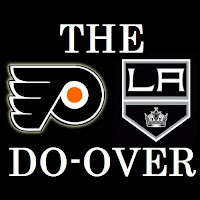 The Kings are attempting to earn at least a point in their ninth straight game, having gone 6-0-2 recently.

With that in mind, here are nine things you need to know prior to the puck dropping at noon PST…

* The last time… Coming off of two of their best games of the year (against the Ducks and Sharks), the Kings lost back-to-back games to the Coyotes and Flyers to end 2010. Those were the only two games coach Terry Murray has pulled his starting goalie and the seven goals given up to the Flyers were the most all season

* As of late, the Flyers have owned the Kings (undefeated in six, 5-0-1 record). You have to go all the way back to the pre-lockout days to find the last Kings win (2002-04 season). Making matters even more daunting, the Kings have never won in the Flyers (not so) new (anymore) building, sporting an 0-9-1 record there. They exercised their demons in Calgary recently, can they do it again in Philadelphia today?

* The Kings continue to have a balanced attack when looking at goals scored by period (49 in the first, 50 in the second and 49 in the third). On the other had, the Flyers have been notoriously slow starters this season – scoring 47 goals in the first and then 66 in both the second and third periods. However, their third period stat is probably misleading, as it includes empty net goals too. The Flyers have the fewest shots in the third period (only 527, compared to 555 and 643). So, the key is to shut them down in the second…as evidenced earlier this year when they scored four goals on the Kings.

* Fan Favorite Ian Laperriere joined us for a game preview when the two teams met in LA earlier this season (available here).  And he gave an epic interview for the launch of the MayorsManor podcast (available here), speaking very candidly about the Kings and his former teammates.  It’s a can’t miss for any Lappy fan.

* Dave ‘the Hammer’ Schultz still holds the record for the most penalty minutes in a season.  The former Flyer and King joined us recently too for a look at his career.  Check it out here.

* Philadelphia’s Andrej Meszaros leads the NHL with a plus-27 rating.  Do you know who is tops on the Kings and his respective rating?  Answer at the end of this article.

They don’t play the games on paper though.  So, as Ponikarovsky said, they need to bring their ‘A’ game if they plan on getting points against the Flyers.