You are here: Home / comments / LA Kings players on what it means to skate at MSG 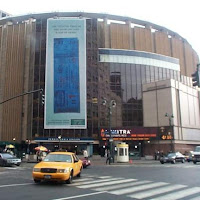 Although every game is worth two points in the standings, some games just mean a little more.

It could be a guy’s hometown, or his former team, or a division rival. There are a myriad of reasons why, yet some players look forward to certain nights with great excitement.

For some cities, it’s not just the team, but the building too. It used to be that way for Boston Garden, Chicago Stadium and Maple Leaf Gardens. With those buildings being replaced with newer, more modern venues though, most of the mystique is gone.

Enter Madison Square Garden. It may be one of the older arenas in the NHL, but it still has all the charm and grace…OK, maybe not grace. But, you’ll be hard pressed to see a game there and not have your heart beating a little faster. It’s electricity personified.

And most of the players agree…

Kyle Clifford – “Every game is special for me. They’re games I’m playing in the NHL. So, it’s an exciting time. I’m sure the experience will be good for some of us young guys that haven’t been there.”

Rob Scuderi, who used to play in the Eastern Conference, has spent many nights at the Garden.  So, the building might not mean as much to him.  But, playing the Rangers, well… “Of course, I hated the Rangers then. So, this will be a little different.”

Kevin Westgarth – “I’ve talked with a lot of guys and they love playing at MSG. Clearly, it’s one of the most fabled arenas in the NHL. It’s such a cool venue. I was actually lucky enough to go see a couple games there when I was in college. Even just stepping outside the rink, it’s a big city. So, it’s going to be pretty exciting.”

Dustin Brown – “I’m from New York. So, that’s probably the one game (on the trip) where I’ll have some friends and family in to watch the game. I think it’s always fun playing in Madison Square Garden. It’s a pretty special building.”

He went on to say it was “unfortunate” the team won’t get to play old teammate Alexander Frolov tonight.  But, added “I’m sure he’ll be around the rink. So, we’ll get a chance to see him.”

More pre-game notes later today.  Up next, comments on the Rangers’ Sean Avery. [update: a link to the article can be found down below]

Brown and Johnson on Playing Pittsburgh Penguins – re: no Crosby, no Malkin

Johnson and Westgarth on the Washington Capitals and 24/7

Ponikarovsky Wants To Win ‘Em All