You are here: Home / comments / LA Kings Players on Second Chance with Flyers 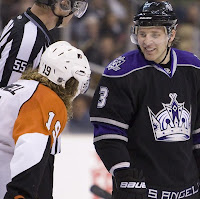 Earlier today, in an article here, Kings resident tough guy Kevin Westgarth spoke about playing the Flyers for the second time this season.

Below, a few others weigh in on if they think it’s an advantage…

Jack Johnson – Yes and no. It’s still a hockey game. Everyone knows every player around the league pretty well, just because we’ve watched each other play enough. I wouldn’t say it’s an advantage just because we played them earlier this year. It will be a fun game, but it will be a tough game.

Kyle Clifford – Well, definitely, especially for young guys, you really don’t know teams too well. Some teams you only get to play once. So, now I know what they’re all about. We had our chances in that (first) game too. So, we’re going to come prepared.

Alexei Ponikarovsky – Maybe. But, it doesn’t change anything for us. We know what to expect. They’re on top of the Eastern Conference right now, so we know what to do. They’re a pretty tough team to play against and we have to bring our ‘A’ game.

So, that’s one yes, one maybe and a yes/no combo.

About the only thing clear at the moment is that the Kings need another two points today.

For the Nine Things You Need To Know about today’s game, check out the Pre-Game Notes article here.

Interview with Dave ‘the Hammer’ Schultz – former Flyer and King