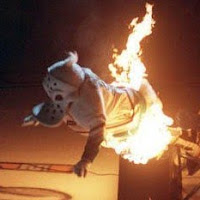 In 48 regular seasons games at the Pond / Honda Center the Kings have only managed to generate 17 wins.

However, many of the games have been memorable – or at least featured memorable moments.

Like any good rivalry, the contests are often very close. In fact, about 20% of the games played between the two teams in Anaheim have required more than three periods of hockey.

Anze Kopitar – “My first game, my first NHL goal. My first game was there and I scored. So, I have some good memories there. It’s a fun building to play in. It’s always a good rivalry. It always has a lot of intensity. And it’s always nice to see the Kings fans make the trip down there. So, that’s probably the best part.”

Willie Mitchell – “For me, I don’t know if it was a favorite, but it’s a memory – when I was in Minnesota and we were playing the Conference Finals. We were playing really good hockey. We were probably the best team left in it. Maybe not the more talented team, but probably the best team as far as playing for each other and stuff like that. We played excellent in there. We just couldn’t score on a guy named J.S. Giguere. That’s probably my biggest memory in Anaheim, trying to get a puck past that guy when he had that over-sized gear on. We couldn’t do it, unfortunately. But, it was a lot of fun to be part of a long run in the playoffs like that.”

Wayne Simmonds – “I played my first exhibition game there my first year in the NHL. So, my favorite? That has to be it.”

Since Doughty left the big fat rebound there, we had to follow-up…

When you say there have been some good ones at home, does that include the payback on Bobby Ryan last year?

“Yeah. I remember he got Oscar (Moller) early on in the season with kind of a dirty hit when the game was over, with just a couple seconds left. So, it was kinda pointless for him to do that. Not that I was head-hunting for Bobby or anything. But, when he came down my way, obviously, I wasn’t going to stop and be a nice guy and not hit him.”

Although Jarret Stoll had nothing specific as far as a memorable moment, he was already sizing up the Ducks…

“We’ve played well in that building. Last year we played really well in there. We’ve only been in there once this year and we lost. But, it’s a tough building to play in. They have a couple of great lines that can do some damage on the forecheck and the cycle. We have to make sure our first objective and mindset is to play well defensively and smother them – not give them any good quality scoring chances. Plus, a good penalty kill. All those things. Just a good checking game. We’re going to get our chances. We know we’re going to get our chances. It’s a matter of bearing down and putting them in the back of the net when we get them.”

Yes, goals would be good. No doubt.

And if they can keep the puck out of their own net the entire night, it would make for a new memory.

The Kings have never shutout the Ducks in Anaheim.

Regardless, LA is just looking for another two points right now.