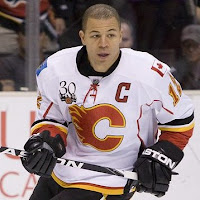 It’s February, which means the hockey world is alive with rumors everywhere you turn.

Sure, there are plenty of stories out there suggesting Jarome Iginla, the Calgary Flames captain, is coming to LA. However, if you don’t want to believe their GM – who has said he won’t be trading him – at least know this, if something was going to happen, it certainly won’t be before the Heritage Classic on February 20.

So, for now, we can focus on the game. With the Los Angeles Kings in Calgary tonight it must be brought up that they haven’t won a game in the Saddledome since December 2005 and are now 0-10-0 in their last 10 visits.

After a tough start to the New Year, they seem to have found their stride more recently, going 4-0-1 mark in their last five games.

The game tonight will not only be a chance to work on those streaks, it also presents the challenge of shutting down one of the best players in the league.

Recently, I asked several Kings’ players what it’s like to play against Iginla…

Ryan Smyth – I think he’s turned it on really well as of late. He’s a big factor for that team and it’s a matter of shutting him down at times. He has a great shot and hopefully we can limit his chances.

Michal Handzus – He’s one one of the top players in the league, for sure. He’s one of those guys who’s very good with the puck. He has a great shot. He can beat you so many ways. He’s very strong. He’s a gritty guy with great hands. You have to play a good all around game against him, with really good checking and always know where he is because sometimes he just disappears and then he reappears in the slot. He has a great shot and a great release. So, you need to always know where he is on the ice.

Anze Kopitar – It’s always tough to play against him. He works so hard. At the same time, he has a ton of skill. His shot is really deadly and it’s burned us a few times when we’ve played against the Flames. So, you always want to be aware when he’s on the ice and make sure you have everything under control.

For more Kings and Flames related news, be sure to check out the interview with Kerry Fraser from yesterday. It’s an incredible conversation and he doesn’t pull any punches when talking about the biggest names in the game – including Wayne Gretzky, Mario Lemieux, Alexander Ovechkin and many others. Perhaps the most raw moment though is his description of a situation involving Theo Fleury. Check it out here.  It’s an absolute can’t miss!

Revisiting a Rivalry – looking back at Flames vs. Kings history
.