You are here: Home / NHL / Ducks / Kings-Ducks: The First Time It Mattered This Much 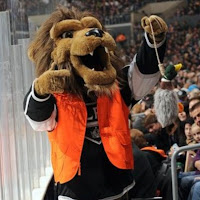 It was 1993. December 2nd to be exact. The Kings were crashing hard, coming down from their high of going to the Stanley Cup Finals just seven months earlier. Now, they were near the bottom of the Western Conference and riding a six-game losing streak.

Across the ice were the Disney-owned Mighty Ducks of Anaheim, playing in their inaugural season. While an expansion team may not sound like much of a threat to the incumbent, the Kings had long struggled to carve out their own niche in a crowded market place. Adding a second hockey team in SoCal wasn’t going to make it any easier.

Yet, so it began. With both teams tied in the standings at 20 points apiece, it was time for the first ever Kings-Ducks game.

Adding concern and worry for even the most die hard of Kings fans was the fact that coach Barry Melrose was starting Rick Knickle in goal, not Kelly Hrudey or Robb Stauber (the two guys that carried the team through the ’93 playoffs). No, he was going with a guy who was playing for the San Diego Gulls the season prior. If you’ve never heard of Knickle or the Gulls, that tells you all you need to know.

Things only got worse when at the 10:13 mark of the first period the Mighty Ducks scored their first ever goal against the Kings. Peter Douris – who? – scored a power play goal to put the Ducks up 1-0. What in the world was going on?

How they were even on the power play is a mathematical marvel. Certainly it was a penalty filled period – one that resulted in the Mighty Ducks being short handed seven different times. On one of those power plays Luc Robitaille was able to score though, tying up the game. Which at that precise moment you could hear the entire building exhale…briefly.

The second period wasn’t nearly as exciting. The Kings were dominating the shot clock 33-10 after 40 minutes, but the game remained tied 1-1. Fans throughout the Fabulous Forum were on pins and needles as they headed to the concession stands and underground bathrooms for the second intermission.

Then Jari Kurri took over. He scored two goals in the first half of the third period, providing the Kings a little breathing room. Although the Kings were now up 3-1 with just under 10 minutes to play, that was a lot of time on the clock to kill.

Ducks fans hoping for a Mighty comeback had their confidence increased when Robitaille was whistled for charging with a few minutes left in the third period. Ducks coach Ron Wilson capitalized on the situation by pulling goalie Guy Hebert, giving his team a two-man advantage.

Shaun Van Allen scored for the Ducks and the hearts of 16,005 Kings fans in attendance nearly stopped pumping. Los Angeles, we have a serious problem on our hands.

Wilson kept Hebert on the bench and the Ducks continued to pepper Knickle. Tick, tick, tick – time seemed to move so slowly. The final 82-seconds finally elapsed and the Kings had won the game 3-2.

On that night the Kings let it be known, this was their town.

“We had to win, let’s be honest.” said Kings captain Wayne Gretzky.

And as the two teams prepare for their 99th meeting tonight, not much has changed.

The Kings and Ducks are still tied in the standings, each with 68 points this time around.

Goaltending will probably play a key role in the game.

Plus, with a slight twist on the Great One’s quote, the Kings have to win.

Kings Players on Their Favorite Memories in Anaheim

.
note: portions of this article originally appeared in a MayorsManor article on February 4, 2010