You are here: Home / NHL / Blue Jackets / Just Play The Game And Have Fun 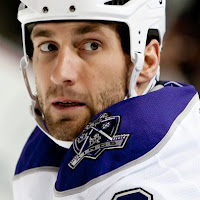 Back on January 7th, with the LA Kings mired in a slump that would linger for a few more weeks, I asked Jarret Stoll what it would take to get the team back on track. He offered up the following solution – “Just thinking the game better. Maybe we’re playing hard, but everybody plays hard. Everybody works hard too or they wouldn’t be in this league. But, you have to work smart and we’re not doing that.”

Now home from a successful road trip, where the team picked up 13 points in nine games, I asked Stoll if maybe not thinking so much was part of what helped turn things around lately…

JS: “Yeah, maybe. Sometimes when you think too much you’re timid out there, you’re hesitant in thinking and reading the play, reading the situation. If you prepared mentally and you’re doing the right things in practice, everything is going to be instinctive anyway. So, if you just go out there and work hard, get your feet moving, do the right things, you’re going to be in the right position. Sometimes when you think too much you’re just over thinking the game and (worrying about) ‘Am I in the right spot? Am I not in the right spot? What are we doing in this situation in our system? Everyone knows the system by now. So, that shouldn’t be the case from game in and game out. Sometimes it changes, but it’s just a matter of playing. Just play the game and have fun. If we play well and we lose, we have to live with that. It’s on the other side of that when we don’t play well – like in Columbus. We kinda slipped up, we got the win though. But, there’s the other side of it. Sometimes you don’t play as well and you (still) get the win. Over the course of the long haul, that’s not going to be the case. So, you have to make sure your game is as consistent as possible – as a team and individually.”

Is that how Anze Kopitar would categorize the trip – winning some games where maybe the team wasn’t playing their best?

Willie Mitchell Not Sure What Happened

How Can the Kings get Back on Track?