You are here: Home / comments / Johnson and Brown on the Pair of Missing Penguins 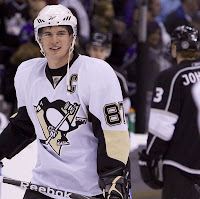 Over the last few years it sure seems like the Kings and Penguins don’t like each other very much. Which is somewhat surprising considering an LA-Pittsburgh match-up in hockey is pretty rare.

Evgeni Malkin, who has often found his way into the storyline when these two teams meet (see Malkin’s hit on Wayne Simmonds in March 2009) won’t be a factor this time around – he’s gone for the season with a knee injury.

Nor will Sidney Crosby, who is still experiencing concussion like symptoms.

Taking nothing away from Matt Cooke (suspension) and Chris Kunitz (lower body injury, listed as day-to-day) – regarding Crosby and Malkin both being out, are some Kings players a little disappointed they won’t be able to test themselves against two of the best players in the league?

Dustin Brown – “I could care less really. We have to focus on our game because (when) you take those two players off their team they still have a pretty good team. So, we have to be ready to go. We have to be extra cautious of not taking them…with those two guys out of the line-up, we have to be even maybe more prepared to go up and play there. It’s two huge points.”

Gift Ideas for Jack Johnson, From His Teammates