You are here: Home / hockey / Everybody Has a Comment on Sean Avery 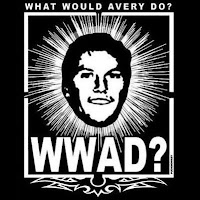 You would be hard pressed to find a more polarizing person in hockey than the Rangers’ Sean Avery.

Maybe even in all of sports.

The scrappy and mouthy forward has spent his off seasons dating famous women, interning at Vogue magazine and exploring the world of fashion.

He once told ESPN he used to play with dolls and enjoys a nice purse.

His Dallas Stars teammates hated him and a mini-revolt was underway even before the ink dried on his four-year, $15.5 million deal.

Yet, for all his troubles, his former coach in LA (Andy Murray) had this to say about him – “Sure, he’s a real character. But he’s become a pretty darn good hockey player for the Rangers.” Later in the same interview he called him “underrated as a player”

The always nice Luc Robitaille called him his “little puppy” when Avery’s name came up during a word association segment.

Legendary NHL agitator Theo Fleury called him “different” during his interview on MayorsManor.

However, long time NHL referee Kerry Fraser wasn’t nearly as nice at first, calling him “troubled.”  He then added, “but, a highly effective, skilled player.”

Supposedly, Avery had clashed with several teammates and coaches during his three-plus years in Los Angeles.  For example, there were reports he made fun of Dustin Brown’s lisp and nearly got into a fist fight with then-assistant coach Mark Hardy at practice.

Ultimately, he was shipped to New York – where he initially thrived.  And after his first full season in the Big Apple he signed the above mentioned free agent contract in Dallas.  An experiment that lasted all of 23 games.

In addition to being a negative influence on the Stars’ younger players (claims made by several in the organization), he eventually made the now infamous ‘sloppy seconds’ comment in reference to Calgary Flames defenseman Dion Phaneuf dating his former girlfriend, actress Elisha Cuthbert.

NHL Commissioner Gary Bettman had seen enough of his act. Avery was suspended from the league.

Upon being reinstated in March 2009, he was claimed off waivers by the Rangers and has remained in New York ever since.

Some guys still don’t like him and probably never will.

Case in point, Ian Laperriere.  One of the few players who can rival Robitaille for his gentlemanly nature and positive attitude, Lappy can’t help but let loose when the name Sean Avery comes up…

“Worst teammate I played with by far – by far, far, far.  I’ve met a lot of good people in my career and I’ve met a few bad ones.  He’s on the top of my list.  It’s not even for what he does on the ice.  It’s everything else he brings to the locker room.  I’ve never been a fan…and I never will be.”

We’ll have to see if Avery, who often finds a way into the storyline of a game, weaves his way into tonight’s Kings-Rangers match-up at Madison Square Garden.

Luc Robitaille on His Teammates

Guys and Dolls – The Hockey Edition