You are here: Home / NHL / Capitals / Dustin Brown Ready For Something New 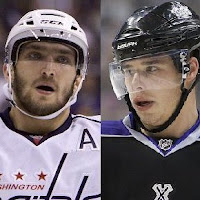 Damn it’s early for a Saturday.  But, there’s hockey to be played – so let’s do this.

While normally the Kings don’t see the Eastern Conference teams too often, seven-year pro Dustin Brown has actually played the Washington Capitals every year he’s been in the league except one (2007-08).

Of those six games, four have been in Los Angeles. So, today will be a rare chance to get an up close look at Alex Ovechkin on his home ice.

And it was two season ago that Brown scored his only goal against the Capitals, the game-winner in a 5-2 win for LA (video of the goal here). The game was far closer than the score indicates though, as the Kings scored two empty net goals in the final minute of play.

When the teams rematched in LA again last season the contest was just as close, with the Kings pulling out a 2-1 victory.

Jonathan Bernier will get the start this morning in Washington and Jonathan Quick will try to garner some revenge in Philadelphia tomorrow.

As for Brown, what does he think about today?

More from Jack Johnson and a few others coming up before the puck drops this morning.

Brown and Johnson on Playing Pittsburgh