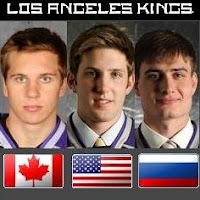 As noted in our World Junior Preview last week, three of the leading contenders for medals this year were the U.S., Canada and Russia.

With only four teams remaining in medal contention, all three are still alive in the tournament (along with Sweden).

Thus, each of the the Kings prospects participating in this year’s WJC – Brayden Schenn (Canada), Derek Forbort (USA) and Maxim Kitsyn (Russia) – could come home with medals.

Better yet, when the semi-finals begin later this afternoon, they’ll all be just one win away from the gold medal game on Wednesday.

Schenn, the Kings first round draft pick in 2009, is running away with the WJC scoring lead. He currently has 16 points, while his next closest challenger has only nine. He also leads all players in goals (7), assists (9) and plus-minus (+10). About the only flaw in his game you can find right now would be his faceoff percentage. As Canada’s top center he’s taken more draws than any of his teammates. However, he’s only won 56% of them – a less than impressive number.

Meanwhile, left-winger Kitsyn (selected in the sixth round this past June) is having a strong tournament for Russia – including a big goal yesterday to tie the score with less than two minutes remaining in their quarter final match-up with Finland. Overall, he has seven points (4g, 3a) and is a plus-5 through the first five games.

Forbort, a 6’5″ defenseman taken by the Kings in the first round of last year’s draft, has yet to record a point. However, of the 15 goals by Team USA, only two have come from their defenseman.

Here’s the line-up for today:

All remaining games can be seen live on the NHL Network.

US-Canada is almost always an exciting game.  Even though this particular contest doesn’t have a medal at stake, it will be just as pressure packed.  The Americans are out to prove that last year’s gold medal victory wasn’t just a fluke or a one-off occurrence.  Team Canada is looking for revenge.  From that perspective, the game should have a ‘medal game’ feel to it.

Be sure to set your DVRs, you don’t want to miss this one.