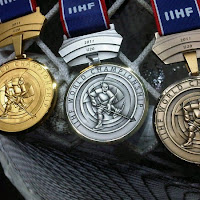 Below are some post game notes on last night’s gold medal contest, as well as updates on two of the key stories coming out of this year’s World Junior Championship…

* Don’t make plans for New Year’s Eve this year. Now that Russia has jammed Canada for the gold medal this year, the pairings for the 2012 WJC have been set. Pool B features Canada, the U.S., Finland, Czech Republic and Denmark. Which means two things – Canada vs. USA on 12/31 and that if they were to meet again, it would be in the gold medal final!

* 2012 Pool A will be Russia, Sweden, Switzerland, Slovakia and Latvia.

* Maxim Kitsyn (Russia), Brayden Schenn (Canada) and Derek Forbort made it a clean sweep for players representing the Kings this year – picking up gold, silver and bronze. This was at least the second time in history the Kings had current prospects on all three teams. In 2009 they had Thomas Hickey and Colten Teubert (Canada, gold); Oscar Moller (Sweden, silver) and and Viatcheslav Voynov (Russia, bronze).

* A list of which Kings prospects might participate next year is a little cloudy at this point. Schenn (2009 1st round draft pick) and Kitsyn (2010 6th rd) will age out, thus won’t be eligible.

– Canada could possibly feature Tyler Toffoli (2010 2nd rd) and Jordan Weal (2010 3rd rd). However, it’s still mind boggling they didn’t take Toffoli this year, as he leads the OHL in goals and points.
– Forbort (2010 1st rd) is a strong bet for the USA team again, while Kevin Gravel (2010 5th rd) would probably have to be considered a long shot.
– Several players that will be taken in this year’s NHL Draft (2011) could be considered, with each being a country by country decision (based upon who is selected).

* Schenn is expected to be traded by the Brandon Wheat Kings (WHL) any day now. Complicating things a little bit is the fact that it was revealed yesterday he played the final two games at the WJC with an injured shoulder (separated in the quarter finals on Sunday). He did not rejoin the Wheat Kings after the tournament, going home instead – where he’ll be rehabbing for the next 10-14 days. For more on the Brayden Schenn trade rumors, click here.

* With two points in the loss to Russia Schenn ended up breaking the Team Canada record for points in a single WJC, set way back in 1977 by Dale McCourt – a guy who once went to court to avoid playing for the Kings (story here).

* Besides his silver medal, Schenn was named the tournament MVP, one of three forwards on the All Star team and the IIHF’s best forward. Not bad, right?

* In November we brought you several stories from the Super Series, considered to be a pre-tournament for the WJC and the second largest international junior tournament. Held each year in Canada, it features a Russian junior-level all star team in a series of two-game exhibitions against the WHL, OHL and QMJHL. Russia took the overall series 4-2, so the fact they won the WJC is probably not the ‘shocker’ the Canadian media is making it out to be.

* Some of the Russian players were kicked off their plane last night and not allowed to fly out after the game.  Apparently, they were too drunk and rowdy.  While the legal drinking age in Russia might be 18, the under-20 tournament was in Buffalo.  So, there wasn’t any under aged drinking going on, right?  No, of course not.

* Be sure to pick up your Kitsyn Gold shirt, now available here.

Another Deadline for Brayden Schenn