You are here: Home / comments / WJC Memories with Captain Canada 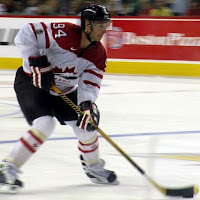 Ryan Smyth is a hockey legend north of the border.

However, long before his resume was full of international acclaim, one of his first assignments for Team Canada was the 1995 World Junior Championship in Red Deer, Alberta.

Smyth grew up in Banff (less than two hours away), so the stands were filled with plenty of friends and family. His regular junior team, the WHL’s Moose Jaw Warriors, were about six hours away and it would still be several more months before he made his NHL debut with the Oilers during a late season road trip to Los Angeles.

Recently, Smyth shared some thoughts about being in that tournament – way back when he was still a teenager…

RS: It was a lot of fun. Great memories obviously. It was the NHL lockout year, so we had a lot of NHL guys at the time – Alexandre Daigle, Jason Allison – who played here – Ed Jovanovski, etc. We had a great team. Those are memories you never forget.

MM: Team Canada is playing with some pressure right now, having lost the gold medal to the U.S. last year in Saskatoon. Back in ’95 you guys were probably playing with a little pressure too because Canada was going for its third straight gold at the time.

RS: I think any time you get into a situation where you’re playing in front of your own fans, in your own county, there’s a lot of pressure. But, it was also exciting. It gave you the extra edge almost – wanting to push and get the seventh attacker involved, as far as the fans. I’m sure the U.S. is trying to do that too in Buffalo. The rivalry over the years between the Canada and U.S. or even the Russians too for that matter, it makes things interesting.

MM: When Brayden Schenn was here he sat next to you in the locker room. You’ve kept in touch with him during the tournament too, is that right?

RS: Yeah. I’ve text him a few times. Obviously when he was here I took a liking to him – how he was as a player and as a person. You just hope for the best for a young kid like that. He’s proving it right now and hopefully he can lead these guys to a gold medal.

That’s his opinion and he’s certainly entitled to it. Personally, I’d like to see the Americans win again. Yet, there’s nothing wrong with a little disagreement.

In all seriousness though, it’s a major bummer that Canada and the U.S. won’t be able to meet in the gold medal game again this year. It’s always exciting when those two meet up. But, it was off the charts when the two countries met for gold twice in 2010 – first at the WJC and then during the Vancouver Olympics.

This time around things will be different. Canada lost to Sweden on Friday (6-5 in a shootout), placing them second in their pool. That forced them to play an extra game today, where they beat Switzerland 4-1.

The U.S. won their pool, going 4-0. Thus, they received a bye into the semis.

Which brings us to the much anticipated match-up…Canada vs. U.S.

They’ll now meet at 4:30 pm PST on Monday. But, there won’t be a medal on the line this time. The winner plays for gold on Wednesday. The loser plays for bronze.

This whole thing is starting to have that same feeling as 2008, which Drew Doughty talked about in his interview here.  Although Smyth wouldn’t agree, let’s hope the outcome isn’t the same.

Ryan Smyth on the 2010 World Championships