You are here: Home / hockey / Update on Scott Parse – The Other Left Wing 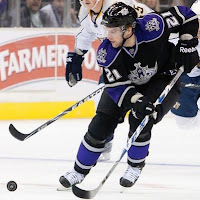 Amidst the Kings’ season long search for scoring left wingers, there is one name that many people may have forgotten…Scott Parse.

After all, he only played in five games before being placed on long term IR. And he was limited to 59 games last year while being shuttled back and forth several times between LA and Manchester (AHL).

So, he’s not exactly a household name just yet.

Even so, optimistic Kings fans had high hopes entering the season – especially after GM Dean Lombardi said “Scott Parse is near the top three on the team in terms of skill” during his State of the Franchise session at the annual HockeyFest event in September.

So, what’s up with Parse now?

Well, he elected not to perform DIY hip surgery, as written about here. Instead, it was performed by Dr. Byrd – one of the leading specialists for sports-related hip injuries.

More importantly, he’s been back training with the team recently.  So, I caught up with him for an update…

MM: Let’s start with the obvious – it’s been about two months since the surgery, how are you feeling?

SP: I’m doing good, getting better every day here. There’s no timetable yet (for my return), but it’s feeling stronger every day.

What’s been the most frustrating part about being off the ice over the last few months, especially these last few weeks while the team has been struggling?

Just not playing. A lot of times you don’t feel like you’re a part of the team. It’s tough, watching the guys play. But, you do what you can and I’m trying to get back as soon as possible.

Along those lines, what do you do to stay connected to the team – maybe try to grab extra lunches or dinners with the guys when they’re in town?

I’ve been around them here at practice now, so that’s been nice. As far as the game situation goes, you want to be a part of it and contribute. I can’t right now, so…

Can you take any positives from having to watch the games as a spectator? Have you learned anything about some of the other teams that maybe you wouldn’t have if you were on the ice?

Actually, yeah. I’ve been trying to watch the other teams’ defensemen a little bit – trying to see their tendencies and pick up anything I can.

We quickly moved on to talking college hockey.  On a somewhat related note, Parse played at the University of Nebraska-Omaha. And over the weekend his alma mater traveled to the University of North Dakota to take on Derek Forbort (Kings 2010 first round draft pick) and his Fighting Sioux teammates.

As for Parse, he’s at least another month away. Original estimates put him out for 3-4 months. So, early March would be a rough guideline.

If he can make it back this season, he could provide some punch to an offense needing all the goals they can get. He’s also solid defensively, having led all forwards last season with a plus-13.

DIY Surgery an Option for Parse?