You are here: Home / hockey / Two Minutes In The Box… with Andrei Loktionov 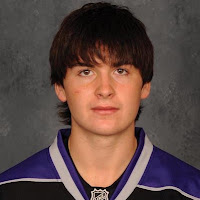 Former fifth round draft pick, Andrei Loktionov, is back with the Kings.

He played one game with the team last year and had a handful of games earlier this year in the NHL before spending most of the season with Manchester (AHL) – where he was leading the club with 23 assists.

The creative center found immediate success upon coming to North America in 2008, winning a Memorial Cup with the Windsor Spitfires. Obviously, that’s something Brayden Schenn, Tyler Toffoli and Maxim Kitsyn all hope to do this season too.

With the help of his non-Russian speaking interpreter (me), we chatted for a few minutes after practice on Friday at the Kings training facility in El Segundo…

MM: When you were here (in LA) earlier this season you were playing wing. How about when you back to Manchester, were you on the wing or playing center again?

AL:  I only play center in Manchester.

You were back on the wing Thursday night vs. Phoenix. Is that something you’re comfortable with?

You looked pretty fast out there against the Coyotes…

Maybe it was a little faster than my normal speed level. I guess I was excited to be playing again in the NHL. Maybe that sped me up.

Earlier this season Jake Muzzin served as our un-official Manchester correspondent, updating us on several Monarchs players (article here). So, I asked Loktionov if he wouldn’t mind doing the same. Apparently everybody is playing pretty well in Manchester…

Jake Muzzin – He was playing well before he was hurt (lower body injury). He hasn’t played in like two months (it hasn’t been quite that long) because of his injury. But, he just started practicing again and is working hard.

Martin Jones – Jones is playing very well. He’s our best goalie there right now. He’s an All Star of course.

Viatcheslav Voynov – He has the most points on the team and he’s playing very well.

Loktionov will be back on the top line again tonight, along side Anze Kopitar and Dustin Brown. Expect to see him on the power play too, as coach Terry Murray had these comments on Friday “He was the player that grabbed the puck in that half-board area (on the first power play Thursday night) and was able to do a couple of evasive moves and settle things out. The penalty killers backed off, and now you can look to move it around and get some opportunities set up through puck movement. That’s the thing that he can do, 5-on-5 and certainly on the power play. We look forward to him continuing to show us the same thing. He can be a very important player to help us get this power play settled out.”

By the way, unlike the photo above, Loktionov had an ear to ear smile going the entire time we were talking. So, yeah – I’d say he’s more than happy to be back in the NHL.

OLYMPICS: Be Careful What You Wish For – notes on Loktionov