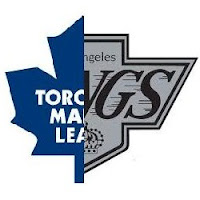 One of the many things separating hockey from the other major sports is that it actually has a capital. Basketball doesn’t have one, nor does baseball – even though Yankee fans would tell you differently.

And regardless of the Maple Leafs’ record at any given time, few in the world of hockey would disagree – except maybe those in Montreal – that the pulse of the sport can be found in Toronto.

The NHL has offices there, it’s home to the Hockey Hall of Fame and even Wayne Gretzky’s restaurant is in downtown Toronto.

Back in 1993 the Leafs were still in what’s now the Western Conference (then the Campbell Conference), along with the Kings.

After beating Calgary and Vancouver in the first two rounds of the playoffs, LA advanced to the Conference Championship for the first (and so far, only) time in team history.

The seven game series that ensued between the Maple Leafs and Kings was as good as any ever played in the NHL.

The only rule – no half points. A full correct is answer needed for the point.

Question 1 – Who were the staring goaltenders for both teams?

Question 2 – Who were the head coaches for both teams?

Question 3 – The Kings coach had a relative on the Leafs. Who was he?

Question 4 – In game one there was a famous incident that happened, where a Kings player did something of significance to one of the Leafs. What was it and who were the two players involved?

Question 6 – Game five went to overtime. Who scored the winning goal and for which team?

Question 7 – Prior to game six a noted Canadian journalist called out Wayne Gretzky. What was the gist of his now infamous quote?

Question 8 – There was a controversial call in game six involving Gretzky. Who was the referee and what happened?

Question 9 – Gretzky had a hat trick in game seven, plus added an assist for good measure. After scoring LA’s first goal, which Kings player did he set up for the second goal of the game?

Question 10 – When celebrating the game seven (and series) victory in the locker room after the game, Luc Robitaille was shown kissing another member of the Kings organization. Who was it?

Answers to the trivia questions can be found here.

For a recap of the series, including quotes from several players, please read this article: Reliving ’93 – When Mullets Were Cool.  It was one of our most popular features from last season.