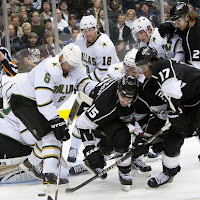 Tonight’s Kings-Stars game will be televised nationally on VERSUS starting at 5:30pm PST.

Although the Kings have been struggling lately, they’ve had significant success against the Stars in recent years: 8-2-0 in their last 10 games vs. Dallas overall, 7-2-1 in their last 10 trips to Texas (including five straight wins) and have beat them twice this year (a 5-2 win in Dallas and a 3-1 victory in LA).

The Stars are 5-0-1 in the month of January though and are looking to keep things rolling.

* Brenden Morrow has to be watched closely. Not only are his 18 goals enough to tie him for the team lead, but he always seems to find the back of the net in crucial situations. While his 37 points (18g, 19a) in 59 games vs. LA don’t scream ‘Kings Killer’, six of those goals have been game winners.

* Both teams have scored an average of 2.9 goals per game this season. When it comes to goal scoring tandems though, the Stars have one of the best. Brad Richards and Loui Eriksson have combined for 100 points so far – trailing only the Sedin twins (113 pts) for the league lead.

* Dallas features the third best power play at home – yet, overall, they’ve only converted 1-for-11 (9.1%) power play opportunities against the Kings this season. Their penalty kill (ranked 19th at home for the season) should be challenged by the Kings 9th ranked road power play – yet, overall, the Stars have killed off 17-of-18 penalties (94.4%) in the last few games they’ve played this month.

* Jamie Langenbrunner has recently returned to the Stars after spending several years with the New Jersey Devils. Tonight will be his 1000th NHL game.

* Wayne Simmonds is out of the line-up and did not make the two-game road trip. Coach Terry will use the following lines: top line of Williams-Smyth-Kopitar, second line of Sturm-Stoll-Brown, third Clifford-Richardson-Lewis and fourth Ponikarovsky-Handzus-Westgarth

* Jonathan Bernier will start in goal. This will be the first time he’s started back-to-back games this season.  In his only other game vs. the Stars, a 2-1 shootout victory last March, he looked spectacular.

Clearing the Crease… with Jonathan Bernier