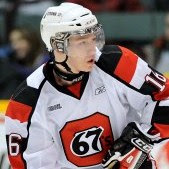 Prior the 2010 NHL Draft in Los Angeles the Kings knew all about Tyler Toffoli.

The same guy who turned them on to Wayne Simmonds was Toffoli’s junior hockey coach with the Ottawa 67’s.

Thought to be a possible late first round pick, when he was still on the board midway through the second round they gladly gave Colorado a fourth round pick for the right to move up and take him. So far, it looks to have been a smart gamble.

Toffoli’s having a fantastic year in the OHL – where he’s leading the league in scoring (38g, 37a in 41 games), was named the Player of the Month for December and on Monday was named January’s first Player of the Week (4g, 5a in three games). It was his second weekly honor, having won it in mid-November as well.

For some reason, Canada felt they didn’t have room for him on their team at the recent World Junior Championship. Go figure.

His General Manager in Ottawa, Brian Kilrea (coincidentally, the first man to ever score a goal for the LA Kings back in 1967) stopped by MayorsManor earlier this season for an interview, available here.

And Toffoli provided some comments here after representing the OHL in the Super Series vs. Russia.

The 67’s are leading their division and have the second best record overall, behind only the Mississauga St. Michael’s Majors. This Sunday the two teams meet in what will surly be an important game.

Adding intrigue to the match-up is the fact that fellow Kings prospect Maxim Kitsyn (2010, sixth round) joined the Majors following his gold medal performance at last week’s WJC. In just two OHL games so far he’s already picked up five points (3g, 2a)

Kitsyn vs. Toffoli – this should be exciting.