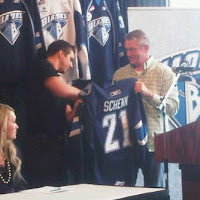 The longest running question this season – Where will Brayden Schenn be playing his next game? – has been answered.

As reported here yesterday, the Brandon Wheat Kings have officially traded him to the Saskatoon Blades.

Having already played with four different teams this season (the Kings, Manchester Monarchs, the Wheat Kings and Team Canada), Schenn now joins the top club in the WHL standings.

The Blades gave up two first round draft picks, one second rounder and a first round selection in the Import Draft to acquire Schenn, MVP of the recent World Junior Tournament. As if that wasn’t enough, Brandon also received two top prospects (Ayrton Nikkel and Tim McGauley) as part of the deal.

Blades GM and head coach Lorne Molleken said “The Saskatoon Blades are extremely pleased to be able to acquire a player of Brayden Schenn’s caliber. It has been a long process. When you are making a deal of this magnitude there is a lot of time and deliberation put into it.”

It has to be a somewhat bittersweet moment though, as Schenn was the captain of the Wheat Kings – yet, now gets to finish his junior career with his hometown team and a club in first place overall in the WHL.

This move also gives him a strong chance to play for the WHL Championship and perhaps the CHL’s Memorial Cup.

For those unfamiliar, the CHL is made of three separate units – the Western Hockey League (WHL), Ontario Hockey League (OHL) and the Quebec Major Junior Hockey League (QMJHL). Each of them runs their own playoff bracket (similar to the NHL) and crowns a champion. Then, the three champs and the team from that year’s Memorial Cup host city meet in a four-team tournament to determine the CHL Champion.

Schenn played in Brandon for the past three seasons and last year they hosted the Memorial Cup tournament – where for the second year in a row it was won by the OHL’s Windsor Spitfires.

This year the Kings have several other prospects playing in the CHL who are on good teams too – most notably Tyler Toffoli (Ottawa 67s) and Maxim Kitsyn.  Fresh off his gold medal win at the WJC, Kitsyn is guaranteed a spot in the Memorial Cup because he’s now playing for Mississauga (OHL) and they’ll be the host city this year.

Like the World Juniors, this year’s CHL finals could see several Kings prospects participating if everything falls into place.

For now though, Saskatoon hosts Brandon tomorrow night. Schenn won’t be in the line-up though, as he’s out for at least another week or so due to the shoulder injury he suffered at the WJC. How crazy would that of been, for his Blades’ debut to be against his old club?

The Kings drafted Schenn in the first round of the 2009 NHL Draft.  He made his debut on November 26, 2009 and played eight games with the team earlier this season (0 goals, 2 assists).  As part of the agreement between the CHL and NHL, he is not eligible to be called up again until after his junior season is completely over (i.e. Saskatoon is eliminated in the playoffs).  Thus, don’t expect to see him back with the Kings until training camp next year.

Interview with Warren Rychel – GM of the Windsor Spitfires

Interview with Brian Kilrea – GM of the Ottawa 67s