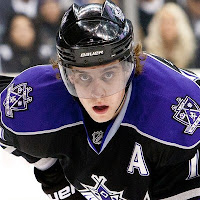 In a little less than an hour, hockey fans everywhere will be treated to something truly unique.  This year’s NHL All Star teams will be selected by Nicklas Lidstrom (Detroit Red Wings) and Eric Staal (Carolina Hurricanes) in a live television draft.

The pre-event storylines are abundant – will the Sedin twins be slit up? Will teammates, like Pittsburgh’s Kris Letang and Marc Andre Fleury, end up on separate sides? Will Staal take fellow Hurricanes Cam Ward and Jeff Skinner? Will Lidstrom draft a heavy-Western Conference team?

It’s a situation where the questions are near endless.

Yet, for the Kings’ Anze Kopitar, the process will relatively stress free.  He doesn’t have another guys from LA with him – so no separation anxiety here or possible hits from Jack Johnson to concern himself with. It’s only been a few weeks since Slovenia even had a second player in the NHL (Jan Mursak of the red Wings). Thus, he won’t be worrying about national pride when lacing up the skates this weekend either.

Perhaps the only thing on his mind right now is will he be the last player selected? A shame that nobody wanted as a kid, nor even sounds appealing to a professional athlete making millions of dollars. Regardless of circumstance, that’s embarrassing.

Earlier this week Shane Doan said he’d take Kopitar early on if he was drafting a team.

Unfortunately, Doan’s not even in North Carolina this weekend.  So, we’ll have to wait and see when Kopitar gets taken…and by whom – Lidstrom or Staal?

Before he left for All Star Weekend though, Kopitar and I did a quick mock draft. Like the ones posted earlier today with Drew Doughty and Matt Greene, we each took one goalie, two defensemen and three forwards.

When it was all said and done, he looked at me and said “I win!”

And while I concede that Doughty’s team probably would have beaten the one I ended up with when we did it, here I least have a strong chance. Right?