You are here: Home / AHL / Martin Jones Named AHL Rookie of the Month 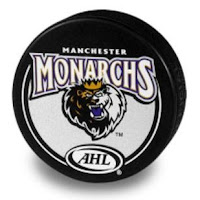 Yesterday, he posted his second shutout of the season, beating the Connecticut Whale 3-0.  Then, earlier today, he was named the AHL’s Rookie of the Month for December.

Originally assigned to the Ontario Reign (ECHL) to start the season, Jones was called up to Manchester (AHL) once Erik Ersberg was released.  While many thought he would be there to back-up Jeff Zatkoff, Jones has continued to put up strong numbers, forcing the team to go with a more balanced workload (18 games for Jones and 22 for Zatkoff).

As noted in the press release…

*  Jones made nine appearances on the month and went 7-1-0 with a 1.99 goals-against average and a .935 save percentage to help the Monarchs maintain first place in the Atlantic Division.

*  He currently ranks second in the AHL in goals-against average (1.60) and save percentage (.948) while posting a 13-2-0 record and two shutouts in 18 games for Manchester.  (note:  Jake Allen, his Canadian teammate at last year’s World Junior Championship, is the other top goaltender in the AHL this season) .

*  His month was highlighted by a game vs. Worcester on Dec. 10, when he stopped 45 of 46 shots in a 4-1 victory; his 22 saves over the final 20 minutes tied an AHL high for third-period saves this season.

* Even in his only loss of the month – a 4-2 setback to Portland on Dec. 12 – Jones recorded 39 saves, and he rebounded with 36 stops in a 2-1 overtime win at Portland on Dec. 18 to begin a five-game winning streak that would carry into the new year.”

* He was the Western Hockey League’s goaltender of the year in 2009-10 and was named the top goaltender at the 2010 Memorial Cup tournament, where he led Calgary to the championship game. Jones also won a silver medal with Canada at the 2010 World Junior Championships.