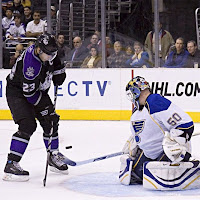 To say the Kings season has been filled with peaks and valleys would be an understatement. Long winning streaks have been filled by horrible periods of loss after loss.

Coach Terry Murray, the players and fans don’t seem to know which team will show up on a nightly basis.

One such example came in mid-December during a five game road trip. Although bookended by 5-0 shutouts to Detroit and Colorado, it was a game in between that perhaps received the most attention. When the Kings arrived in St. Louis they hadn’t lost in regulation for five straight, Jonathan Quick was playing as well as he had all year and they were about to face a Blues team that was decimated with injuries.

LA lost 6-4.  Is there anything they can take from that game in preparation for the rematch tonight or do they start with a clean slate?

Jack Johnson – “We definitely scored plenty of goals. We scored enough goals to win that game. That was a rough game for both teams really, they just happened to score more goals than we did. I think (the rematch) will be a lot different. Both teams were pretty bad, in terms of giving up some great scoring opportunities. One of the things we can take out of it was our power play was great in that game. So, we should have some confidence going into it.”

Michal Handzus – “We were pretty good offensively, but our defensive game wasn’t there. So, I think that’s what have to do. For the next game and throughout the remainder of the season we have to really focus on our defensive game because we’re giving up too many goals and too many easy goals. So, we have to focus on the defense game and if we do that, the offense is going to take care of itself.”

Trevor Lewis – “I don’t think we had the best game in St. Louis. We can’t worry about what they’re going to do here though. We have to come out and play like we know how we can and play that full 60 minutes instead of taking time off. We need to get a full team effort in.”

When asked if that’s been the biggest problem over the last few weeks – taking time off – Lewis added “Yeah. Our starts have been good. But, obviously, there are a few shifts where we kinda relax a little bit and then all of the sudden they get one or two and then we kinda get down. Then, when the third comes we start going again. If we can play like we know how for all 60 minutes, we’re a great team.”

Unfortunately, that greatness hasn’t shown up much recently.  In the first six games of this season long eight-game homestand the Kings have managed just one win.

They need to play as many minutes as it takes tonight to skate away with two points.

Dodgers-Kings Have a Perfect Relationship

Gift Ideas for Jack Johnson, From His Teammates – the defenseman’s birthday is Jan 13