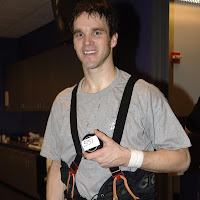 The Kings played many classic games against their former Smythe Division rivals back in the 80s and early 90s.

Since moving to Staples Center, the team has played some epic contests against those teams as well.

On January 19, 2006 they visited the Kings and played foil to Luc Robitaille‘s historic evening.

Entering play that night he had scored 13 hat tricks in a Kings uniform. When the game was over LA had downed the Thrashers 8-6 and Robitaille had become the King of Kings.

In the first period he tied Marcel Dionne for the most goals in franchise history with goal number 550. His game winner in the third period broke the mark and with little time remaining he added an empty net goal for good measure. It wound up being his last hat trick as a King – but, certainly his most memorable.

He scored five more goals before retiring at season’s end with 557 as a King. His number was retired 366 days later and he eventually was elected to the Hall of Fame.

A few other notes on Luc…

* His first NHL hat trick came during his rookie season on December 9, 1986 at the NY Islanders.

* Only one of his 14 hat tricks with the Kings were scored ‘naturally’ – that occurred on February 11, 1988 vs the Quebec Nordiques.

* Other than the Atlanta game, perhaps his most significant hat trick will forever be lost in history. On October 6, 1988 he put in three goals vs. the Detroit Red Wings. Few fans will remember that accomplishment though. Instead, that game will forever be remembered as Wayne Gretzky’s first game with the Kings.

* His 14 hat tricks don’t even come close to the franchise record for the most ever. Who holds that mark and with how many? Answer at the end of this article.

* With the Kings playing the Blues last night, here are three interesting notes on Luc and the city of St. Louis:

– In his second season fans voted him as the starting left wing for the Campbell Conference in the NHL All-Star Game held in St. Louis on February 9, 1988.

20 Questions with #20 – in-depth interview with Luc

Answer: The record for the most hat tricks in franchise history is held by Marcel Dionne (24)