You are here: Home / draft / Kopitar Comes Close at NHL All Star Game 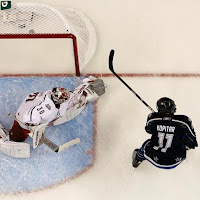 The Los Angeles Kings (and their fans) have faced many injustices this season – from what should have been Ryan Smyth’s game tying goal in Ottawa to Jonathan Quick not being included on the NHL All Star team. And yes, there was also the blown call against Phoenix, which later cost GM Dean Lombardi a $50,000 fine.

What happened in Raleigh, NC over the weekend wasn’t quite to those epic levels. Yet, it did once again put the lack of respect west coast hockey faces front and center.

Friday night’s All Star Draft was a fantastic event. What sounded great on paper delivered even more than expected. One criticism – how in the world does Anze Kopitar not get selected until the 15th round (30th overall)?

During Saturday’s Super Skills competition you could probably argue Kopitar didn’t do himself any favors. Competing in two events, he finished with less than stellar results. In the hardest shot competition he posted a best of 94.5 miles per hour, only good enough to rank him 10th out of 12 shooters. And in the breakaway challenge, which was basically a trick-shot competition, he finished fourth out of six in fan voting (12.5 percent of the vote). However, as things played out, he probably had the best shot at beating two-time defending champion Alex Ovechkin. Unfortunately for Kopitar, his super slick second shot didn’t make it past the goaltender.

Then on Sunday, when it mattered most, Kopitar let his skills shine through – even though the pre-game line combinations could have been perceived as partially another slap in the face. He was placed on the fourth line, centering Phil Kessel (the last player taken in the above mentioned draft).

Once the puck dropped it didn’t matter. Kopitar scored the first goal for his team – after they had dug themselves a 4-0 hole – and later added a second one for good measure.

The initial goal was a beautiful backhander over Cam Ward’s glove, causing the Carolina Hurricanes goaltender to remark on air “Good thing we only see that guy once a year.”

After the game Kopitar simply said “We were down 4-0, so you know there was enough time to wait for it. There was a mini-break, and luckily for me, it went in.”

Along with his pair of goals, he finished the night with a plus-2 rating and had more ice time than any other forward on Team Lidstrom (16:10).

If he played for an east coast team, probably a lock.

LA who? Kopitar what?

Instead, the award went to Patrick Sharp of the reigning Stanley Cup Champion Chicago Blackhawks.

For now, Kopitar and the Kings remain close. But, when it comes to respect – just like the Western Conference standings – they’re still on the outside looking in.

Other notes from the All Star Game:

* Lidstrom and Shea Weber were a combined plus-13.

* Jeremy Roenick proved once again that he has a great sense of style – calling the Ducks’ Jonas Hiller‘s all black mask “ugly” and “horrible” when asked for an opinion.

* NHL.com is running a post-game poll asking ‘Who had the most impressive All Star game performance?’ Four players are under consideration – Sharp, Kopitar, Henrik Lundqvist and Danny Briere.

* All non-goalies on Team Lidstrom recorded at least one point, except defenseman Keith Yandle and Kessel.  Which begs the question of what else Kopitar might have been able to do had he gotten the chance to play with some of the more…um…high profile players.

* Regarding Ward talking about only playing the Kings once – ironically Kopitar scored his first goal of the season against Carolina when they visited LA on October 20th.  ‘Canes backup goalie, Justin Peters, was in net that night though.

Finally, if you read the article posted on Friday where Kopitar and I faced off in a mock All Star Draft, you may recall him talking a little smack at the end – proclaiming “I win” in reference to his team. Well, it shall be noted that Team Mayor had five goals and three assists to Team Kopitar’s one goal and five assists. My goaltender (Tim Thomas) gave up four goals on 15 shots, while his (Lundqvist) gave up three goals on 14 shots. Thus, I reject his theory…and I WIN.

Quick and The Kings, Still Waiting for All Star Game Call

Interview with Luc Robitaille – 20 Questions with #20

Shane Doan would pick Anze Kopitar at the Draft