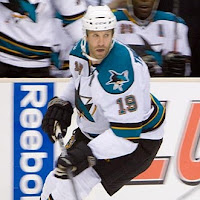 Whenever the Kings and Sharks meet the game is usually filled with multiple subplots to the two points at stake.

Tonight finds the season series tied at one game each, with both teams looking dominant in their victory. There’s the battle for the Pacific Division, something the Sharks have owned the last few years and the Kings are trying to wrestle away this season. Of course, there’s also the Dean Lombardi angle – with the Sharks being his former team.

However, let’s not forget Marco Sturm vs. Joe Thornton. On the surface it may not seem like a fair fight right now, considering Sturm’s recent knee injuries. Yet, when two players are traded for each other a sort of natural rivalry builds as each wants to prove he was the more valuable piece in the deal.

Although Thornton has posted big numbers the last few years, the Kings have been able to contain him just about better than any other team in the Pacific Division. He has more penalty minutes against LA, his lowest plus minus (still a plus-8, but it is his lowest) and his second worst point totals.

Even better, the Kings have kept him off the scoreboard the last two seasons at Staples Center (zero goals, five assists in six games).

His Sharks will possibly arrive in downtown tonight a little road weary too. They played back-to-back games in Minnesota and Chicago (losing to the Wild and beating the Blackhawks by identical scores of 5-3), then arrived in LA past 2am on Friday morning.

MM: The teams are 1-1 this season. How do you see things setting up for game three?

JT: It’s going to be a real good game. We took the first one and then they came into our building and took the second game. Now we’re going to play them twice in a week, so hopefully we can grab two points in this one.

MM: What differences have you seen in the Kings this year vs. the team you played last year?

JT: You know what, they were a great team last year too. So, really they’re pretty much the same type of team. They haven’t really changed too many players on their team. Obviously, they added Marco Sturm a couple of weeks ago though. But, they’re a quick team, a good team and a well rounded team.

MM: Some guys have said they look at the opposition a little differently having played with certain players in the Olympics last year. Drew Doughty was with you on Team Canada. Does that change how you view the Kings defense at all?

JT: Not really. Once the Olympics were over I think it just went back to regular business. If Drew’s out there, I’m sure he’s going to hit me. If I have him lined up, I’m going to hit him too. So, I’d say it’s business as usual.

MM: Any added pressure this year playing with the ‘C’?

JT: Oh no. I’ve always felt like I was a leader on this team. So, there’s no added pressure at all.

MM: You took over the captaincy after Rob Blake retired at the end of last season.  Talk about the impact of losing him on the Sharks team this year.

JT: Blakey is a tough guy to replace. He played a lot of minutes, he played power play, penalty kill, etc. He’s a big right-handed shot and he’s physical. So, losing a guy like that, plus all the leadership he brings, it was tough early on to see who was going to replace that. But, we’ve found some guys who have chipped in and replaced some of Blakey’s shoes. But, I don’t think you can ever replace a guy like Rob Blake. He’s a future Hall of Famer.

For some of Blake’s thoughts on Thornton, check out the interview he did on MayorsManor last season.