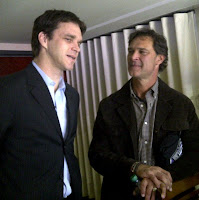 It was game seven of the Kings’ season long eight-game homestand – the part of the schedule that was supposed to see them climb the ranks of the Western Conference.

It was also the seventh time the Kings and Dodgers had joined forces on the marketing front. For ‘Dodger Pride Night’ at Staples Center they had manager Don Mattingly on hand for the first puck drop, former player Billy Ashley (who wore number, you guessed it – seven!) available for autographs and even produced a special Dodger themed hockey puck.

Past joint efforts had produced a perfect 6-0 record for the home team.

Similar to last month’s visit to St. Louis, the Blues looked ripe for the picking. They had lost five in a row and were still missing several key players with injuries. On the other side, the Kings were desperate for a win, after losing six of their last seven (there it is again!), and coach Terry Murray had put last year’s most successful line back together – Ryan Smyth, Anze Kopitar and Justin Williams.

As they say, the games aren’t played on paper.

The Kings were caught standing around several times on the ice and St. Louis looked like the team that wanted the victory more. They got it too, downing the Kings 3-1 in perhaps the most embarrassing home loss of the season.

Along with the defeat and further slide down the standings, the Kings-Dodgers perfect relationship is no more.

Here’s a look back at their previous efforts…

*  February 2, 2010 – Andre Ethier drops the opening puck at Staples Center before the Kings beat the Rangers by a score of 2-1.

*  July 9, 2010 – It’s Kings night at Blue Heaven on Earth.  Brown plays hockey in the dugout with Russell Martin before the game and the Dodgers go on to beat the Cubs 9-7.

Number seven wasn’t so luck this time around.