You are here: Home / hockey / Interview: Catching Up with Derek Forbort 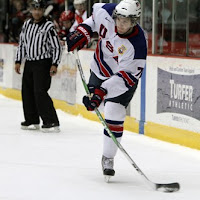 A few months ago prospect Derek Forbort stopped by to talk about being drafted by the Kings (first round, 2010) and adjusting to life as a freshman at the University of North Dakota.

Fresh off of winning a bronze medal last week at the 2011 World Junior Championships, he’s back again. In the interview below we reflect on his experience at the WJC, talk about this weekend’s big match-up vs. Minnesota and look ahead to the second half of the NCAA season…

MM: So much has been written about the games themselves, how about we start away from the rink – what did you guys do on the off days in Buffalo (at the WJC)?

DF: We went to a couple movies. We saw ‘The Little Fockers’ on Christmas Day, which is a pretty brutal movie. We hung out at the hotel a lot really. Not much else. There wasn’t really a lot going on in Buffalo.

MM: Besides the high of winning the bronze medal, what were some of the other highlights for you personally?

DF: I played with a lot of the guys last year (in the US National Program), so it was a lot of fun getting back together with the boys, seeing what they’ve been doing lately and so on.

MM: On the flip side, I would assume losing to Canada in the semi-finals was the low…

MM: Is it something that eats at you or do you just file it away in the back of your brain?

DF: You have to put it in the back of your mind, but it will stay there for a while. That was pretty tough. It was an embarrassing loss. If I’m fortunate enough to play next year, hopefully we can get the job done against them.

MM: Two other Kings prospects were in the tournament – Maxim Kitsyn (Russia) and Brayden Schenn (Canada). Did you get a chance to talk with either of them at all during the two week experience?

DF: No, not at all actually. All three of us were pretty focused on winning that gold medal. I’ll have to wait until the summer to see them again.

DF: We definitely saw it. All of us were watching it, that was crazy. It was a pretty special game to watch. Too bad we weren’t part of it, but it was still a great game. Once Russia got that one goal lead I was thinking ‘Wow, they can really do this.’

MM: Team USA played five different teams in the tournament. Was there any particular player on one of the opposing teams who you were really impressed with?

DF: Sweden had a pretty tough team. (Adam) Larsson was really good on defense. They also had some forwards that were pretty tough to deal with.

[note: Larsson is currently the number one rated European player for the 2011 NHL Draft and some scouts think he could go first overall.]

MM:  What was the reaction like when you got back to campus?

DF:  I think all of the guys on the team were watching.  But, as far as the general public, unfortunately I really don’t know.

MM: Looking ahead to your next game, UND has a big series this weekend with Minnesota. Nick Bjugstad, one of your teammates at the WJC is on that team. When you guys were together in Buffalo did you talk at all about having to face each other?

DF: A little bit, a couple of friendly chirps here and there. We didn’t talk about it too seriously. We were part of the same team, so we were both focused on the more immediate goal.

MM: Another guy on that USA team was Charlie Coyle from Boston University. What were your impressions of him?

DF: He’s a great player, he works so hard. He’ll fly with the puck and he does everything really well. He had a great tournament, for sure.

MM: What will be the hardest part about adjusting back to being on the Sioux team after having spent nearly a month away?

DF: Nothing really, I already feel like things are back to normal. It’s been really exciting to be back with these guys and I can’t wait to get on the ice for the game.

MM: In the first half you had nine assists and were plus-five in 17 games. What are your personal goals for the second half of the season?

MM: That first one hasn’t come yet. How close have you been?

DF: Not really that close at all actually. I’ve always been known more as a passer than a shooter I guess.

MM: You come back to a Sioux team ranked #2 in the country. Coincidentally, your coach with Team USA was from #1 ranked Yale (Keith Allain). Was there anything you learned from him in Buffalo that you plan on applying at UND?

DF: He was a really intense coach who preached hard work. If anything, I’ll bring that back.

MM: Besides this weekend with Minnesota, as you look over the second half of the college season is there any one team you have circled on your calendar? If so, which team is it and why?

DF: I had the Duluth games circled. But, the first time they came here I had mono (Nov 5/6). Then, the next time (Dec 30) I was at the World Juniors. So, I didn’t get to play Duluth. This weekend with Minnesota should be pretty fun though.

Yes, it should be. Minnesota – North Dakota is one of the biggest (and best) rivalries in college hockey, with the Sioux holding a 5-2-3 record in the last 10 games. Minnesota has won five national championships. North Dakota has won seven. 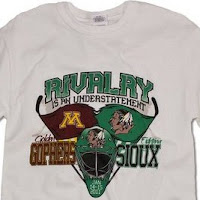 You can throw it all out the window tonight though. These two teams don’t like each other and they’re playing for bragging rights – as the shirt says ‘Rivalry Is An Understatement!’

Who knows, maybe Forbort can even pick up his first college goal. He’ll be in jersey number four – keep an eye on him.
www.facebook.com/MayorsManor