You are here: Home / comments / How Can the Kings Get Back on Track? 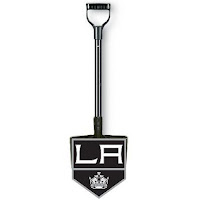 When the Kings lost a few games last week it was easy to blame the four-in-five-nights schedule.

As the losing streak continued into this week some pointed to the injuries of Willie Mitchell and/or Alexei Ponikarovsky. That’s too easy though and it hasn’t slowed other teams. Take Nashville on Thursday – they were missing Steve Sullivan, Matthew Lombardi, Cal O’Reilly, etc. and they played the night before in Anaheim. Yet, they still beat LA 5-2.

So, what will it take to turn things around?

Jack Johnson – I think we need to be a little bit quicker. Teams have been quicker than us, especially in the last few games we’ve been losing. I feel like they’ve been out-skating us. When you play a team that seems like they’re a little bit faster, you’re going to have a long night. As a whole, we need to be on our toes a little bit more and skating more.

Jarret Stoll – Smarter hockey, I think. Just thinking the game better. Maybe we’re playing hard, but everybody plays hard. Everybody works hard too or they wouldn’t be in this league. But, you have to work smart and we’re not doing that.

Brad Richardson – It’s such a fine line between winning and losing in this league. There’s just little things that turn the game around – not getting a puck deep, a turnover or taking a penalty at the wrong time. So, there’s a lot of things that can factor in. But, it seems that we’re doing something like that each game. Even against Nashville – we were up, then we turn it over and all the sudden we’re down by a couple of goals. It’s frustrating. And you see some of the breaks you get when you’re losing too. Like the game before where we had one pop over the net (Chicago’s fourth goal on Monday). You’re going to get stuff like that. But, we have to find a way to dig in and get out of this.

Well, break out the shovels then.

Even Mitchell and Ponikarovsky can help with some digging, as they’ll both be back in the line-up versus Columbus.

Tonight’s game brings the Kings halfway through an eight-game homestand and just one game shy of the season’s midpoint. They need to start picking up some wins before other teams begin creating some serious separation in the Western Conference standings.