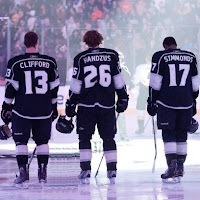 Earlier this week the Kings reached the midpoint of their 82-game regular season. In a separate article today we shared comments from the Kings’ defensemen, providing their thoughts on the first half of the season.

Now, let’s see what eight of the forwards have to say…

Wayne Simmonds – Obviously, I don’t think up to this point our season has gone the way we wanted it to. But, we just have to put that behind us and we have to get going here. It’s half way through the season now and every point counts. I think we’re going to have to be a desperate hockey team in the second half.

Ryan Smyth – I thought we started out really well, played very decent at home. Then, we lost seven out of eight – we didn’t need that. But, I thought at times throughout that we played pretty well – we just didn’t get the end result we wanted. Right around Christmas we were going good. We were strong and had a few good games – against San Jose, Anaheim and Edmonton in there too. We had some confidence and felt really good as a group. For whatever reason as of late, from then on it hasn’t been the greatest. It’s been spotty. I don’t think we’ve played up to our potential by any means. But, the best thing is we have the second half that we can move forward with and hopefully gain some points.

Jarret Stoll – I think our start, 12-3 was a pretty good start for us. It’s pretty easy to see the low points with our…I think we lost seven of eight at there at one point and right now we’re at five in row. So, we need to get back to our winning ways and winning as a team, battling and competing as a team and playing as a team.

Alexei Ponikarovsky – We have a great team here, a great bunch of guys and we’re still a young team. Everybody is learning and it’s a process. We just have to get better and get back on track right now. For me, the first part of the season was disappointing, in terms of injury and stuff. I’m just looking to get back and help the team make the playoffs and fight for a Stanley Cup.

Brad Richardson – The start we had was pretty great. We were first in the league for a while. We showed everyone we can be an elite team when we play well. But, obviously, this is probably the low point of the season right now – losing five in a row. This is a critical time of the year, leading up to the All Star break. Everything is really tight in the Western Conference and you don’t want to come into that home stretch where you’re not in a playoff spot and you’re trying to climb. That’s not easy, it’s very hard.

Michal Handzus – I think the high is that when we play our game we’ve shown that we’re a really tough team to beat. I think we’ve shown that in a lot of games and we won those games pretty dominantly. The low is that we’re inconsistent. Sometimes we don’t show it. Sometimes we go on a winning streak and we play like that for four, five or six games. Sometimes, not even for a full game – we’ll play well for two periods and then one period not very well and we lose the game. So, if we can find some consistency throughout the end of the season, we’ll be a tough team to beat.

[Bonus question for Handzus:  Besides the overall play being inconsistent, so have the line combinations.  Do you feel that impacts your game in any way?

MH:  I don’t think so. I think last year was even more shuffling of the lines and we were pretty consistent. So, I don’t think that’s a big deal. The coach is just trying to get us going. I don’t think any guy in the locker room has a problem with it. It’s a matter of us needing to buy into the system. I think we’re there and then we have some breakdowns, making some really easy mistakes and then we just give up the goals. So, I don’t think it’s about the lines. It’s about us focusing on things a little bit more.

Kyle Clifford – Definitely that big start of 12-3 was a big high point.  It’s good to know that we can do that.  This last stretch has been tough.  But, we have the ability to turn it around.  So, to get back to where we were would be good for all of us.

Trevor Lewis – I think for a while I was playing pretty well and playing pretty consistently. Then, it sort of got away from being consistent. I just have to find that even ground again and keep playing well and start getting back on track.

Hey Trevor, you’re not the only one!  The Kings need a team effort for 60 minutes.

And Simmonds had it right.  Things are starting to get desperate.