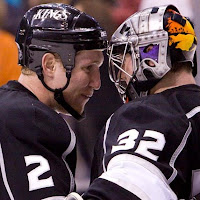 In the past we’ve used our popular High / Low format to have guests review various things – Rob Blake and Luc Robitaille reflected on their careers, Jim Fox offered opinions on opening night and playoff games, and even some guys from Manchester have stopped by to talk Monarchs hockey.

With the Kings reaching the midpoint of the 82-game NHL schedule earlier this week it seemed like the perfect time to survey some members of the team for their High/Low points of the season to date.

Let’s start with some guys on the blueline…

Jack Johnson – We got off to a great start and we’ve had some pretty tough losing streaks here. It’s pretty easy to pick those out. During the course of the year you’re not going to play great every game, over 82 games. You’re going to have some tough stretches. But, I think ours have been a little bit longer than we would have liked or that would be expected.

Drew Doughty – The lows are the couple of losing streaks we had. We’re not happy at all with those let downs. For some highs, we’ve seen that when we play our best we’ve shown what we can do. We went on that long winning streak as well, where we dominated those games pretty much. So, the bright side is we’ve seen how good our team can be and we just need to be at that level every night.

Matt Greene – It’s been an up and down year, pretty average throughout and we’re looking forward to the second half and turning things around.

Greene went on to provide the following additional comments…

MM:  Coach Murray and some of the players have commented that during the losing streak in November the team was actually playing well in most of those games. From your perspective, how are things different when you compare that stretch with what’s been going on lately?

MG:  I don’t think we’ve been playing well (recently). In that case it was a matter of hitting posts or running into a hot goaltender or hot teams. This time around we’re finding ways to beat ourselves. I think it’s just mistakes and it’s some sloppy play.

MM:  There’s been a lot of focus on the line changes for the forwards – however, there’s also been some changes within the D pairings at times. How does that impact your game at all and/or is it easier to play with certain guys?

MG:  I think everybody back here is pretty used to each other. When you look at the guys in our top four, they’re great defensemen. They can work well with anybody. I’ve played with Marty (Alec Martinez) for a long time, but I think at one point or another everybody on this team has played with everybody. So, that’s not an issue. That might be something within the forwards, that chemistry and stuff like that.  But, on the back end, throughout the game you’re going to take at least a couple of shifts with each guy on the team. So, it’s pretty much a non-issue with us.

MM:  Anze Kopitar made the All-Star team this week.  Any comments about Jonathan Quick not making it too?

MG: I don’t know what the process is. I don’t know what’s going on there. He’s been having a great year for us. He’s been vital for us. I definitely think he’s our MVP half way through the year. Congrats to Kopi, I think he’s having a hell of year too. If they were going to have two guys, that’s them right there. They’ve both been lights out for us. Quicker not making it is too bad.  I think Kopi more than deserves it, but Quick does too.

Later today I’ll have High/Low comments from the forwards and Coach Murray.

Luc Robitaille – Hall of Fame week, then near the 2010 Trade Deadline