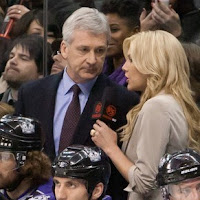 Yesterday, Kings defensemen Drew Doughty, Jack Johnson and Matt Greene provided their highs and lows from the first half of the season.

Even though last month Willie Mitchell jokingly said “Forwards just skate up and down and don’t think” that didn’t stop eight of them – including Ryan Smyth, Wayne Simmonds and Jarret Stoll – from adding plenty to the discussion here.

And while some have criticized coach Terry Murray‘s even keeled approach behind the bench, know this – he’s never allowed others to make excuses for his team’s poor performance. It’s been a season filled with incredibly tall peaks and extremely deep valleys and we’re only at the midpoint of the regular season.

Murray – “The start of the year was absolutely outstanding. It was the start that we wanted, that we talked about and that we needed – it was there. The players played real well. You get off to that 12-3 start the way we did, out of the box, that’s a nice – we’ve said this in the past – it’s a good cushion. We needed it and we’re using it right now. We have to start going again. But, we’ve gone through some stretches of games where we’re in the same doldrums as right now. We’re not able to find the way to get the job done. This is the second time, maybe, where we’re going through this. That’s the inconsistency of our game and that’s the expectations that are coming to the forefront as you start the year. They’re high (the expectations) from within here and from the outside. We have to live up to them. That’s hard to do sometimes, but we’re trying to do it. We’re a young hockey club that’s a pretty good group of guys, a great group of guys. We’ve just got to be better at living up to that part of the deal.”

With seven losses in the last eight games, tonight will be the team’s last chance to impress the home crowd before heading out on a short two-game road trip next week.

It’s time they start living up to some of those expectations Murray referred to.