You are here: Home / NHL / Kings / Gift Ideas For Jack Johnson, From His Teammates 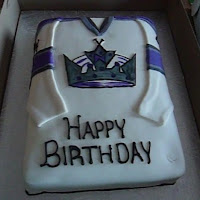 Clifford’s not even legal yet, so you can’t take him out for a drink. And Johnson, he inked a seven-year, $30 million contract over the weekend – what do you get a guy who just signed that type of a deal?

Matt Greene – ‘You show up to his party and he better have a good gift bag. You don’t get him anything. You just grace him with your presence. You can’t buy him anything he can’t get himself.’

Ryan Smyth – ‘I think he already got his present.’

Drew Doughty – ‘I don’t think money is going to get him anything good, so maybe I’ll get him a nice sentimental gift. [MM: Any ideas yet?] Nothing yet. I’ll have to think hard about it. Maybe Wayne (Simmonds) and I will come up with something for him.’

Wayne Simmonds – ‘I don’t know if you can get Jack much right now. He’s sitting on top of the world. He’s probably pretty happy and we’re excited for him, having just signed that big contract. He’s turning 24, so he’s getting kinda old. I don’t know what you can get a guy like that.’

What does Johnson make of all this? He said “I actually kinda forgot about my birthday to be honest with you. After 21 they really don’t mean anything. So, I have nothing planned, nothing going on – just another game.”

Aw, Greene will be so disappointed.

Back to Clifford, I asked Trevor Lewis if he had picked out a gift for his roommate yet…

“I’ll probably get him a card or something, we’ll see what happens.”

A card?  Looks like Clifford’s best present may have been the one given to him by coach Terry Murray – he’s been bumped up to the second line for tonight’s game vs. St. Louis.

Finally, no confirmation yet that the team was chipping in to get Hrudey a new bandana