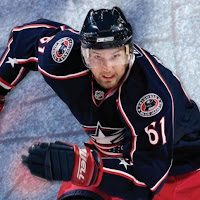 Forty games into the season the Kings were supposed to be near the top of the Western Conference. They entered the season with high expectations after a return to the playoffs last year and were thought to be a much better team than the Blue Jackets – who most predicted would be near the bottom of the standings.

Instead, LA enters the game tonight in 12th place, just two points ahead of the Blue Jackets.

The Kings have the third best goal differential in the West (+17), while the Jackets have the second worst (-21). Yet another argument that suggests all the stats in the world mean little compared to the only thing that really matters – wins and losses.

At the 2002 NHL Entry Draft Columbus selected Rick Nash first overall. After his rookie season in the league he was one of three finalists for the Calder Trophy. The following year he had a career-high 41 goals, tying him with Jarome Iginla and Ilya Kovalchuk for the Rocket Richard Trophy as league goal-scoring champion.

Thinking they could build the franchise around him, they made him captain and in 2009 signed him to a eight-year contract extension. That hasn’t stopped the trade rumors though. A coaching changes and multiple roster moves haven’t seemed to help much, so questions continue to arise about the possibility of the 6’4″ right wing being sent to another team.

For now, he’s still with the Blue Jackets. In 27 career games vs. the Kings he has 21 points and his 12 goals are the fewest against any Pacific Division team.

He’s a player several Kings know fairly well. Ryan Smyth played with him on the Canadian team at the 2005 World Championships. He won a gold medal with Drew Doughty and Team Canada at last year’s Winter Olympics. And Brad Richardson played against him quite a bit growing up.

Here are some thoughts from several Kings’ players on Nash, the Blue Jackets biggest offensive threat…

Jarret Stoll – You have to play him hard. You can’t give him too much time and space. You need to be physical on him and you can’t respect him too much. Obviously, you have to respect him a little bit. But, if you respect good players too much, by the end of the night they’ll have three points.

Brad Richardson – I’ve played against him since even we were in minor hockey, way back. Obviously, he’s a very talented player and has been for a long time in this league. So, he’s a guy we have to key on and finish our checks on every chance we get.

Jack Johnson – He’s a great player. There’s no question about it. He’s big, he’s strong, he’s fast, he’s skilled – he’s one of the best forwards in the world. So, it will be a fun time and you have to keep to your eye on him.

In the only other meeting between the two teams this season the Blue Jackets beat the Kings 5-3 at Staples Center.  Nash had two goals that night, including at empty netter in the final minute of play.  It was LA’s first home loss of the season, after winning their first eight.

How Can the Kings Get Back on Track? – exclusive players comments on what’s needed

Predictions for the 2010-11 NHL Season – thoughts from the Mayor