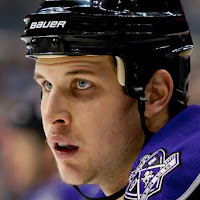 The Kings drafted Kyle Clifford in the second round of the 2009 NHL Draft. A few months later after rookie camp in LA, then-assistant coach Mark Hardy called the young left wing his MVP of a two-game series with Phoenix – saying he played hard every shift, showed tons of grit and looked like a true power forward.

Even though he went on to impress others in the organization during the full training camp that followed, he was still just 18 years old at the time and not ready to make the jump up to the NHL. He was returned to his junior team in Barrie (OHL), where he put up 57 points in 58 games (28 g, 29 a) and totaled more than 110 penalty minutes for the second straight season.

In addition to his stats, other aspects of his game were being noticed around the junior league and in the annual OHL Coaches Poll last spring he was voted the best defensive forward in the Eastern Conference and second in the ‘Hardest Worker’ category.

Over the summer he was invited to Team Canada’s evaluation camp for the just completed World Junior Championships (something he reported on here).

Then, with all the attention focused on Brayden Schenn’s chances of making the Kings roster this past September, all Clifford did was go out and earn himself a spot in the NHL. Starting on the fourth line with limited minutes, he gradually moved to the third line and yesterday was promoted to the second line – along side Michal Handzus at center and Dustin Brown on the right side.

Given coach Terry Murray‘s frequent line changes over the past month or so, I asked him how long of a rope Clifford will get playing on that second line…

TM:  “A very long rope. I really like the way his game is developing. He’s been an incredible surprise for all of us from the day he got here in training camp. He’s growing each and every practice, each and every game. I’m seeing good things happen with confidence carrying the puck, making plays now and he’s bringing stuff that we talked about (earlier in the scrum) with Simmonds – that grit, that hard play. He’s establishing a presence in the game and certainly in our line-up. He will get a very long rope.”

Clifford – aka The Colonel – makes his official debut on the second line tomorrow night against St. Louis.

It will be Clifford’s 20th birthday too – and we’ll have more on that tomorrow.

Warming Up for the World Juniors w/ Kyle Clifford

Clifford Explains His Nickname – The Colonel