You are here: Home / Interview / Clearing the Crease… with Jonathan Bernier 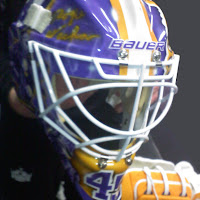 In the interview below goaltender Jonathan Bernier says “Sometimes it doesn’t go your way.”

For him personally and for the LA Kings, that’s a quick synopsis of the season to date.

By this point the team was expected to be near the top of the Western Conference. On this homestand specifically, they were expected to create some breathing room from the teams below them – not trying to catch the teams above them.

And for Bernier, this year was supposed to be a coming out party. He had accomplished all there was to achieve in the minor leagues – including winning the AHL Goaltender of the Year last season while posting 30 wins, nine shutouts, a .937 save percentage (.937) and a 2.03 goals-against average.

After a brief call up last season that saw him go 3-0 in the NHL, some were ready to crown him this year’s Rookie of the Year.

However, it hasn’t quite worked out that way.  Instead, the Kings have lost seven out of eight and now sit in 10th place.

Tonight, when the Kings will be honoring their greatest goaltender of the past (Rogie Vachon), coach Terry Murray is once again handing the keys to the supposed goalie of the future.  Bernier will be looking for a win against the Edmonton Oilers, desperately trying to secure another W for his 4-7 record.

It’s been a tough year so far. What’s his take on the situation…

JB: I don’t think I’ve been playing the way I want to and the way I think people expect me to play. Sometimes it doesn’t go your way all the time though and you have to work at it to turn things around. For me, it might just be one shot that’s going to help me turn this thing around. So, I just have have to work at it and make sure I’m prepared every game. I want to give my team a good chance to win every night. That’s really what I’m looking for. Sometime bounces are not coming, but you have to make that save that’s going to make the difference between a W or a loss.

MM: When Carey Price reflected on last year and what went on in Montreal he said he found it really challenging to not be playing as often as he was used to. You knew you were going to be the back-up this year – yet, has that been a major adjustment for you or do you think it’s been a non-factor?

JB: Obviously it has been because when you’re a number one goalie, at least for me, my confidence has always been really high. I think it’s a little bit different when you’re a back-up. It’s not really hard physically, but it’s hard mentally to stay positive all the time.

MM: Back in training camp you said the rivalry between you and Jonathan Quick was a friendly one. At any point has frustration started to set in and possibly strain the relationship at all?

JB: No, it’s fine. He’s doing his job and I’m doing my job. That’s all that matters. We’re on the same page on that. The important thing right now is just to win. It doesn’t matter who is in net. We just want to bring the team down the right path and get the organization on the right path too. So, we just want to do our best and we don’t really think about the other stuff.

Back is September nobody would have thought that tonight’s game vs. the Oilers would be such a big one, for Bernier or the Kings.  However, make no mistake about it, this is about as ‘must win’ as it gets.

Reaction to Quick Not Making the All-Star Game