You are here: Home / Russia / Another Deadline for Brayden Schenn 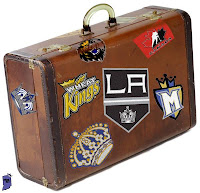 Brayden Schenn will be leaving the World Junior Championship later today with another medal to add to his collection.

It could be gold.

However, if the Russian team can somehow wrestle that away from Canada, it will be silver for the second year in a row.

Schenn’s only other remaining item of business at the WJC is to try to break a 33-year old Canadian record for the most points in a single tournament. He enters tonight with 16 points (7g, 9a), just two shy of Dale McCourt‘s 18 points in 1977.

On a quick side note, McCourt was awarded to the Kings as compensation for Detroit signing Rogie Vachon in August of ’78.  He refused to come to LA and a nasty court battle ensued.  McCourt, LA and a court battle…for some reason that has a familiar ring to it.

After the game, attention will almost immediately be directed toward a new question – Where is Schenn headed next?

In a season that’s already seen him make stops in LA (NHL), Manchester (AHL) and Brandon (WHL) – the rumors are about to pick up dramatically regarding his future destination.

Besides the usual NHL chatter about Toronto trying to acquire him, this coming Monday is the WHL trade deadline and he’s excepted to be dealt.

Here’s a brief overview of the three main players at the center of the trade rumors:

Brandon Wheat Kings – his current team sits last in their division and second to last in their conference…they hosted the Memorial Cup last season, but probably are looking to rebuild for the future at this point…Schenn (the team captain) won’t be back next year, so why keep him?

Portland Winterhawks – thought to be the front runner just a few weeks ago…they already have Nino Niederreiter (arguably the most exciting player in junior hockey right now) and lead the Western Conference with 53 points…however, they recently made several other moves (including acquiring Craig Cunningham, captain of the Vancouver Giants), so do they still have the assets to make a run at Schenn and/or do they want him at this point?

Saskatoon Blades – Schenn’s hometown team leads the Eastern Conference with 61 points…they’ve also scored the second most goals in the WHL (151)…do they really need more offense…if so, at what price and would they be bidding against themselves?

[Jan 8, 2011 UPDATE:  According to an article in Regina’s Leader Post, the Kootenay Ice are now “among the suitors.”  They’re battling Saskatoon for the best overall record in the WHL and both teams have made it clear “they want to make a splash at the deadline.”  Full story up on the MayorsManor homepage.]

All of that fun starts tomorrow.

Canada beat Russia 6-3 in the opening game of the tournament for both teams.  Schenn and Kitsyn each had a goal that day.

Regarding the re-match, Schenn said “I think Russia is a different team from when we played them on Boxing Day (Dec. 26). I’m sure the systems are better, they’re quicker, faster, and they’ve build a lot more chemistry. But so have we.” He later added “We didn’t come here to beat the U.S. (in the semi-finals). We came here for the gold medal.”

Back in ’77, when McCourt was setting the points mark, the Soviet Union defeated Canada for the gold.  Although this will be Russia-Canada, will history repeat itself tonight?