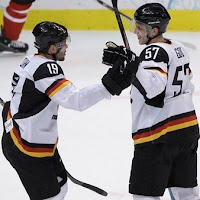 It’s been two weeks now since Marco Sturm played his first game with the Kings. Along the way he’s picked up a couple of goals, an assist and is a plus-3.

From the outside looking in, he appears to be getting his strength and speed back – the two things he’ll need to be successful in the second half of the season.

In fact, yesterday on NHL Live radio, Kings’ broadcaster Jim Fox said Sturm has “an intimidating quickness that backs off defenders” – something that can create more room for linemates Anze Kopitar and Dustin Brown.

MM: First off, how do you think things are going so far?

MS: It’s been OK. I’m just trying to get back in the mode of playing hockey again, it had been a while. So, the first few games were kinda weird. But, slowly, I’m catching up a bit and playing with the Kopitar line makes things a little easier.

MM: Is it safe to assume you didn’t know too much about Kopitar before joining the Kings?

MS: I knew a little from watching him. I knew he was a great player. But, it’s tough when you’re in the East. You don’t see much of what’s going on in the West, even the games – it’s mostly just highlights.

MM: Speaking of familiarity, was it a little easier for you to play against an Eastern team (Philadelphia) recently, as you’re probably more familiar with the Flyers than say the Sharks or Blackhawks over the last few seasons?

I don’t think so. You’re right, I probably know the guys a little bit more than the ones in the West.  But, I think now, in this game, it’s all about us and how we play.  It’s all about us and it wouldn’t have mattered if we were playing an East or West team.

MM: The World Junior Championships are wrapping up this week. You played there in 1995 and 1996. It was almost like two different tournaments for you too. The first year you didn’t have any points. Then, the next year, you finished second overall with 10 points (behind Canada’s Jarome Iginla). What do you remember about playing in the WJC?

MS: Those are good memories. At the first World (Junior) Championship I was 15, I was playing with 19-20 year old guys, so I didn’t play much. But, it was a great experience. I was just glad to be there. For the second one, I was already playing in the Elite League at home (Germany). That really helped and it kinda carried over to the WJC. I had a good tournament and I think that’s why I was drafted a little bit higher than expected.

Thursday night Marco will get to see one of his countrymen, Marcel Goc (of the Nashville Predators) – they played together briefly in San Jose during the 2005-06 season, as well as several international tournaments for Germany.

Meanwhile, to read what Ryan Smyth had to say about his time at the ’95 WJC with Team Canada, click here.