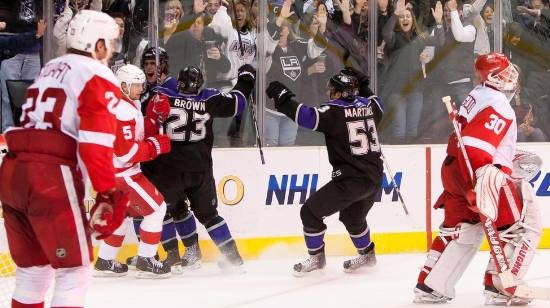 Anze Kopitar continues to get it done for the Kings.

In their 25th game of the year, he had the winning goal with less than a minute to go in overtime.

Quickly, here are the other eleven things of note from LA’s big win over Detroit…

* Quick, which player has the most goals among the Kings defenseman? Here’s a hint, it’s not Doughty or Johnson. It’s…Alec Martinez! Over the weekend we’ve had a few articles on some Kings prospects playing college hockey this season and the former Miami RedHawk now has two goals in his five games played.

* Justin Williams said he thought his early second period goal got the team going. I would say, well sorta. Former Kings coach Andy Murray used to talk about the importance of the next shift following a goal. Sure, Williams’ goal was a big one. However, giving the lead right back to the Wings, less than a minute later, was fairly deflating.

* Quick, as in Jonathan, was outstanding from about five minutes after that goal through the end of the game. He looked like the Quick who was in net during October. His performance also helped deny Wings goalie Chris Osgood (who had gone 7-3 in 10 previous Staples Center starts) his 399th career win.

* The streaks continue… LA remains perfect in overtime this year and the Kings have now killed off 43 of 43 penalties at home.  They’re also 2-0 in the month of December.

* Speaking of penalties – quick, when was the last time a goaltender was whistled for playing the puck outside the trapezoid? I certainly can’t remember. Osgood was called for it at the 8:56 mark of the first period.

*  How did Dustin Brown not have a hat trick tonight?  Man, he was so, so close to scoring…more than a handful of times.

*  Quick, somebody working at Staples Center talk to the people that need to be talked with. You can’t have overtime sponsored by Air Canada when the Red Wings are in town. The neon scoreboards were lit up red throughout most of the extra frame. Isn’t seeing all the Red Wings jerseys in the stands punishment enough?

*  Line-up changes – Wayne Gretzky was at the game.  Heidi Androl was not.  Instead, she was working the Strikeforce fights (MMA) in St. Louis for Showtime.  Unfortunately, the Wings were without American hockey legend Mike Modano.  He suffered a freak wrist injury last week and is on the shelf for several months.  See below for a link to his classic MayorsManor interview.

*  Quick, guess how many minutes Drew Doughty played tonight. Sit down for this one. Over 30!  While that might be the most he’s played this season (and his career), it still doesn’t hit the 35 minutes a night Luc once claimed Brian Leetch used to play in New York (story here).

*  The team Christmas party is Sunday, so it could be a slow news day.

*  Here’s a quick video of the team celebrating in the locker room after last night’s game.