You are here: Home / NHL / Kings / Would, Could, Should and Schenn 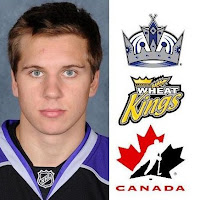 While the topic du jour right now in LA hockey circles is what to do about the Kings recent losing streak, there is still another little matter brewing in the background…what to do with Brayden Schenn.

On Monday he was recalled from a two week conditioning assignment with the Manchester Monarchs, the Kings AHL affiliate. However, he didn’t play in the game that night vs. the Ducks.

Following practice today, Coach Terry Murray – after first saying “I haven’t made a decision on that yet” – eventually said he doesn’t plan to play Schenn tomorrow night vs. the visiting Florida Panthers.

So, just what is the broader plan for the young center?  Here are some additional comments from Murray…

MM: There was a report yesterday on HNIC radio that the Kings are hesitant to send Schenn back to juniors as long he would be returning to a poor team (Brandon Wheat Kings). So, would the Kings be more interested in sending him down if he was traded to another WHL club first?

TM: I don’t plan on putting Brayden in tomorrow. It’s always easier, maybe, given the way we started the first 15 games of the year. We were off to a great start, and you could put a young player in and there’s good momentum. You’re rolling, things are happening. (Instead) you’re trying to get it turned around right now. You’re looking to veteran players and to put your best players on a line, or lines, together and let those guys make the difference in the game. So, I don’t want to throw that responsibility on his shoulders right now. I don’t think it’s the right thing to do. The fact that he went down and played, and played well, in the American Hockey League is a good thing. I know he had some success there and played a lot of minutes. You can only do it for two weeks though. So, we have to make a decision on what we’re going to do. (That report) is somebody talking about it, speculating or maybe they know more that I do because I don’t know all that stuff.

MM: Does that mean you’re not looking at the quality of the team he would be going back to as a factor in the decision?

TM: I haven’t seen a junior hockey game for so long now. I don’t know what he’s got. I know they went to the Memorial Cup last year. I know things change quickly in junior hockey.

MM: Well, they were the host team.  So, they had the automatic bid…

TM: Still, they (the CHL) had to project them to be a pretty good club, giving them the tournament. It’s always good to go back and win. If he went back to junior, it’s important to play a lot, be successful and it’s always great to go deep into the playoffs and have an opportunity to really have an impact on a team that can be very successful. I don’t know what his team is like. I don’t know what the team in Brandon is all about and how they’re doing.

[note: the Brandon Wheat Kings currently have a record of 11-17-1-1 after 30 games…they sit fourth in their division and eighth in their conference]

MM: Another option for Schenn would be Team Canada. Could the Kings possibly release him to play in the upcoming World Junior Championships?

TM: It hasn’t been discussed at my level. Dean (Lombardi) could have certainly…I’m sure is talking about stuff like that because we already went through that with Oscar Moller. Two years ago he went back and played.

MM: And was injured (clavicle fracture)…

TM: Yeah, unfortunately. It set him back the rest of that year and maybe had an impact on how things went the following year. But, if he (Schenn) does go back to junior, that would be a great thing for Canada because he’d be an important player for them.

We also spoke with Brayden Schenn after practice today.  To read some exclusive comments he provided MayorsManor, click here.