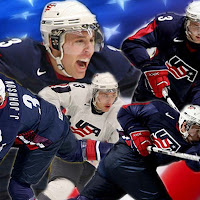 Earlier today Drew Doughty joined us for a look at Team Canada.  In the article below we’ll take a look at Team USA and get some thoughts from Jack Johnson regarding his time at the WJC back in 2006 and 2007.

Last Game: The Americans needed overtime to secure a victory in their opening game vs. Finland on Sunday (3-2 final). Forbort and Team USA had a 2-0 lead heading into the third period, but they let Finland back into it. Nick Bjugstad (nephew of former Kings forward Scott Bjgustad) scored the overtime winner. He stopped by MayorsManor over the summer to talk about all sorts of things, the interview can be found here.

Next Game: Today at 5pm PST Team USA will take on Slovakia in a game that can be seen live on the NHL Network. The Slovaks don’t have some of the big names in the tournament – like they did at the recent Olympics.  However, they’re a scrappy team who picked up an overtime win vs. Germany in their opening match-up.  Germany threw 48 shots on goal at Slovakian goaltender Dominik Riecicky.  Yet, he found a way to get the victory.  He’ll face a tough test against the high powered Americans today.

The 2006 WJC featured names like Evgeni Malkin (Russia), Nicklas Backstrom (Sweden) and Steve Downie (Canada). Meanwhile, the U.S. squad featured a future Duck and a future King in Bobby Ryan and Jack Johnson. That team almost won a medal too, falling short to Finland in the bronze medal game.

One year later Johnson returned to the WJC and this time came home with some hardware, beating host country Sweden for the bronze. He provided the following exclusive comments about both experiences…

MM:  What are some of the key memories overall from the two years at the WJC?

JJ:  I was happy I got to win the bronze medal there.  I had a lot of fun, lots of great memories from the tournament.  I think we had two great teams that we thought should have done better than we did.  But, I was able to play with a lot of friends, guys that will probably turn out to be lifelong friends.

JJ:  It was a fun tournament there in Vancouver.  It was a great atmosphere, great time.  I scored that goal in the bronze medal game against Finland.  I thought we should have won that game too.  I thought we should have done better both years.  But, we had to pull our goalie in one of the round robin games (pool play) to try and win the round robin.  It put is a tougher route than we wanted.  It was a fun tournament though.

MM:  The following year you guys lost 2-1 (semi-finals) in another US-Canada classic.  Knowing how proud you are to be an American hockey player, is that one those losses that sits with you and eats at you?

JJ:  We went into that game expecting to win.  I thought we had a better team.  I thought we should have won in that shootout too.  I know at the time we thought we had the better goalie and the better shooters going into the shootout.  We wish we could have gone through their roster.  I think we had more depth.  But, in a shootout anything can happen.  It is what it is though.  Canada had a great team, the U.S. had a great team and it came down to a shootout.

Johnson went on to say that although he hasn’t met Forbort yet, he’s pulling for his fellow American and hopes the future King can win gold this year.

As for his time in a U.S. jersey, his other international experience includes three IIHF World Championships and two Under-18 tournaments for Team USA.

Oh yeah, and he returned to Vancouver as part of Team USA for this past February’s Winter Olympics.  While he earned a silver medal there, it came at the hands of Canada once again after Sidney Crosby scored an overtime goal in the gold medal game.

Given that he’s only 23 years old, you can probably expect to see Johnson patrolling the blue line for the red, white and blue in several more tournaments in the years ahead.

Perhaps there’s even a gold medal in his future at some point.  Only time will tell.