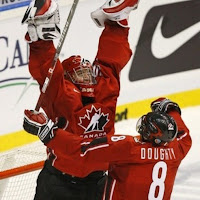 In this article we’ll take a look at Team Canada and get some thoughts from Drew Doughty on his time at the WJC back in 2008. Later this afternoon we’ll look at Team USA with another special guest.

Last Game: In their first contest of the tournament Canada met up with another medal favorite, Russia. Schenn (Kings 2009 first round pick) had a goal and an assist as Canada downed the Russians 6-3. Kitsyn (Kings 2010 sixth round pick) had the first goal of the game for Russia.

Next Game: Today at 1pm PST Canada will take on the Czech Republic in a game that can be seen live on the NHL Network. This will be a much bigger test for the Czechs, who won their opening game on Monday by a score of 2-0 over Norway.

At the 2008 WJC held in the Czech Republic, Team Canada was littered with future Kings – goaltender Jonathan Bernier; defenseman Drew Doughty and Thomas Hickey; and Wayne Simmonds at forward. They beat Sweden in the final by a score of 4-3, something Doughty spoke about recently:

MM: Most people are familiar with your gold medal victory this past February at the Olympics.  However, you also had a pretty big moment back in 2008, being part of the team that won Canada it’s fourth gold in a row at the WJC…

DD: It was amazing. We had so much fun. It was a great group of guys, a lot of guys who are already playing in the NHL – which shows how good of a team we really were. I met my roommate there, Wayne and I were roommates at World Juniors – so, we kinda built our chemistry together and that’s a big part to my success in the NHL, having a guy who you can have similarities to and have fun with. It definitely helps you in the NHL. That (event) was one of the stepping stones in my career. It was one of the times I really had to step up to the plate and be at my best. I think from then on out I grew as a player.

MM: The U.S. met Canada that year in the semi-finals. In a bit of a twist, the U.S. team had gone unbeaten in pool play and had a bye into that second round match-up. Meanwhile, you guys played your way into that game and then defeated them 4-1. Any memories from that game?

DD: I remember being fully prepared for them. We knew they had some firepower up front [James van Riemsdyk (Flyers) led the tournament with 11 points, Colin Wilson (Predators) tied for the lead with six goals] and they were pretty good all around. But, we went into that game with no doubts in our minds that we were going to beat them. And we took it to them right from the puck drop. We obviously dominated that game.

MM: In addition to the gold medal, you were also named to the All Star team…

That’s a bit of an understatement. He finished the tournament with four assists (second best among all defenseman), zero penalty minutes and was even (+/-) over the seven games played. Canada also had the best overall penalty kill (89%), an area where Doughty was no doubt a major contributor.

Further, he became just the fifth Canadian player to be named the Top Defenseman of the tournament…and the first to do it before being drafted into the NHL.

While this year’s Canadian team is battling the likes of Sweden and the Czech Republic this week in Buffalo, Doughty will get a chance to meet up with two of his other teammates from 2008 – Kyle Turris of the Coyotes on Wednesday and Claude Giroux of the Flyers on Thursday.