You are here: Home / comments / Westgarth and the Week Ahead 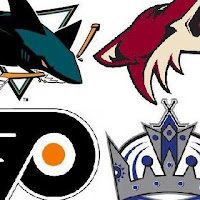 As we enter the final week of 2010, the schedule doesn’t appear to be friendly for the Kings.

Last night’s game with Anaheim began a stretch where they’ll play four games in five nights – something they haven’t had to do since the 1994-95 season. And that includes 1998, 2002, 2006 and 2010 when the NHL played a compressed schedule due to the Olympics.

Even though forward Kevin Westgarth was a healthy scratch vs. the Ducks, he knew what last night’s game meant to the Kings – saying things like “looking to get a little vengeance” and “we need to come out swinging after Christmas.”

Yes, they needed payback as well as momentum – something that had been on their side since the first meeting with the Ducks, having gone 7-2-1 since that 2-0 loss in Anaheim on November 29.

With the payback complete, in the form of a 4-1 beat down last night at the Staples Center, now the Kings are looking to keep the momentum going.  Here’s how Westgarth sees the match-ups this week…

MM:  You guys haven’t seen much of the Sharks this year.  Yet, you’ll get them twice this week.  What’s your read on San Jose right now?

KW:  It’s a team that’s just incredibly dangerous. You can be up a couple (goals) and you’re still never really comfortable. They’re another team that’s had their struggles this season. So, it just seems like such a measuring stick.  A lot of teams are really going to want to get back to playing great hockey right after this break, to get rolling in the second half of the season. It’s not exactly the half way point, but everyone has had some time to regroup and look at where things are. They’re going to be in the same boat as us – looking to roll into the new year. As a I said, they’re a really dangerous team. I think we match up pretty well. We just need to take care of business and make sure we’re playing our game.

MM:  Game three of this brutal stretch will be in Phoenix on Wednesday.  It will also be the third city in four nights. Thoughts on that one?

KW:  They’ve kinda had their ups and downs, not unlike ourselves this season. So, I think they’re going to be a team that’s hungry. Staying on the right track coming out of the Christmas break is going to be huge. We definitely need to start picking it back up and getting to where we were at the start of the year – really stringing some wins together and playing hockey the right way for 60 minutes, night in and night out. We really need to make sure we’re putting a stamp on that. Phoenix is a good team, so that will be a good test.

MM:  Thursday night it’s back home against the Philadelphia Flyers.  The Kings have played pretty well against the east this year and Jack Johnson says it’s “refreshing” to play those teams.  Size up the game with the Flyers for us…

KW:  It’s an exciting game – great team and a lot of connections to us, with the coaching staff and some of the guys on the team. It’s pretty exciting. There’s another Princeton grad that plays there, Darroll Powe (note: he actually captained the Tigers his senior year, 2006-07) and he’s having a pretty good year. So, it sounds like things are going great there. They’re another physical team that’s incredibly dangerous, not unlike Anaheim. Even some of their goalscorers can be a little curt out there on the ice. That’s always exciting to get into those games. They’re a fantastic hockey club, just a couple games away from winning a Stanley Cup last year. So, again, that will be another great test for us.

MM: Recently word circulated that Chris Pronger would be out 4-6 weeks, meaning he’s going to miss the game in LA.  At the time, did the guys on the team talk about it or was it just filed away for later because the focus was on the next game, not a game further down the line?

KW:  You hear it – a guy like Pronger, honestly, there probably are a few guys that are a little relived. He’s a great competitor and obviously a big, physical body back there. He’s not afraid to mix it up a bit too. He’s a good hockey player. By the time you get to that game, you’ll look at their line-up and we’ve seen it already this year – different teams have had some pretty big names out. But, then you look top to bottom at the line-up and it still looks pretty strong. So, there’s an example of it right there. But, obviously missing a guy like Chris Pronger is going to do a little bit of damage to your back end. We cant change the way we’re going to play though. We’re just going to have to make sure we take care of business there too, especially to leave with a good feeling as 2010 will be over.

Westgarth has played in 25 of the Kings first 34 games.  There’s a strong chance he’ll see some more action this week because the Kings are playing two more division opponents and a usually-mean Flyers team.

Interestingly, four of his six fights this season have come against Eastern Conference teams…and the other two came against the same opponent, John Scott of the Chicago Blackhawks.

Along with a scrap or two against guys like Ryane Clowe and Jamal Mayers (Sharks); Paul Bissonnette (Coyotes) or Daniel Carcillo and Jody Shelley (Flyers), Westgarth wouldnt mind finally picking up his first NHL goal.  He had 11 of them last year in 76 games with the Monarchs (AHL).  But, finding the back of the net in the NHL remains on his to-do list.

If he could do it this week, that would put another of those stamps on 2010 he’s hoping for.

Then, Along Came Jonathan Bernier