You are here: Home / Interview / Two Minutes In The Box…with Brad Richardson 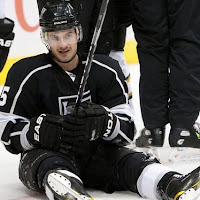 Brad Richardson has been up, down and all around this season for the LA Kings. He’s played top line minutes with Anze Kopitar…and been a fourth-line role player along side Kevin Westgarth.

So, naturally, in the article below he covers things from all bases – talking about the team’s recent play, this week’s game preparation and the ever changing line combinations.

MM: Given the number of losses over the last few weeks, where is the frustration level within the team right now?

BR: I don’t know if it’s frustration. I think we obviously are (frustrated). But, we thought we played well in Anaheim. That was one of the best games we’ve played in a while. I think we know what we have to do and we’re determined. We want to turn this around right now. We don’t want to let it slide any further.

In a situation like this, do you guys spend any extra time preparing for opponents like Florida and Detroit – or is the focus more internal?

We go over video and review the team for every game. It doesn’t matter if it’s an exhibition game or if it’s Florida or whoever it is. We know our opponents. But, the main thing right now is we’re trying to focus on what we need to do. We’re working on certain things in practice – our forecheck, creating a little more offense, getting the ‘D’ involved. Right now it comes down to us and working hard for 60 minutes.

You’ve been up and down the lines this season. Does it get frustrating at times not knowing who you’ll be playing with on any given night or are you just happy to be getting minutes?

I guess a little bit of both. Obviously, it’s nice to be in the line-up and contributing. But, it would be nice to be on a line where you kinda know what your role is going to be. But, that’s the way it is right now. So, that’s what I have to deal with. Wherever I’m playing, I’m going to try to go out and do my best and contribute to that line.

Keep an eye out for him. Brad Richardson – a plug and play option on line-up cards everywhere.