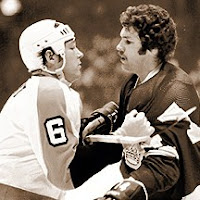 These days the connection between the Philadelphia Flyers and Los Angeles Kings is largely off the ice, through members of management.

Back in the ’70s it was completely different.

Not only did they come into the league together in 1967, but they shared a few players early on – including the Kings sending two of their more popular players to the City of Brotherly Love in January 1972, Cowboy Bill Flett and Eddie Joyal.

In 1976 Dave ‘the Hammer’ Schultz joined the list, joining the Kings after winning two Stanley Cups with the Flyers (’74, ’75).

As a rookie in 1972-73, he led the league with 259 penalty minutes. He nearly doubled that two years later when he posted 472 penalty minutes, setting the NHL’s single season record – a mark that still stands today and will probably never be broken.

He had 232 penalty minutes in his only full season with the Kings (’76-77), a record that stood for 10 years – until being broken by ‘Tiger’ Williams.

With the Flyers in town tonight to take on the Kings it was only natural that we reached out to the man who was one of the most feared enforcers the game has ever known.

MM: First off – what are you up to these days? You did a little coaching at one point, is that something you’re still interested in?

DS: No. I took a stab at it, but there’s too much moving around and I’ve been out of the game too long. I’ve left that behind me. I’ve done a few different things since then. For about a year now my main thing is I’ve been selling electricity in deregulated states, like California. I sell to commercial, industrial businesses. I still do a little bit of memorabilia. I do a little bit of stand-up comedy once and a while. Hopefully my movie will get made at some point. My son Chad wrote the script and it’s starting to generate a fair amount of interest. But, it’s still not a signed deal.

It’s the one where you can’t wear tape on your hand (boxing wraps actually). I was in Montreal for the NBC Game of the Week and John Van Boxmeer stuck his stick between my legs and I nailed him. He went down. I had tape on my hands for my protection, just to kinda hold things in place. I couldn’t wear it after that.

Former referee Bryan Lewis was on NHL radio a few weeks ago and he said you two share many stories.  What’s your most memorable story that involves him?

He helped my penalty total quite a bit, not that I didn’t deserve any of them. But, most of them I didn’t. One night, I was still in the American League – in Hershey, some of us went for a bite to eat and a beer the night before a game. He was there and we were talking and whatnot. The next night, within minutes, I don’t recall doing anything and he kicked me out of the game. I guess he was just trying to prove a point, don’t try and suck up to the referees.

Back in the day you recorded a song called “Penalty Box.” How did that come about and what was the reaction like from some of your teammates?

They already probably thought I was goofy anyway. Some guys came to me, they knew a guy named Kal Mann – who wrote many, many great songs. Somehow these people knew him and they got him to write the song. I couldn’t sing. It was more of a joke than anything I suppose. Of course, they played it a lot in ’75 when we beat Buffalo in the Finals.

There’s a pretty famous story about the time you fought another former King, Dave ‘Tiger’ Williams. How did he stack up compared to some of the other tough guys you squared off with?

I only fought him once to be honest with you. I ended up getting a triple game misconduct. He got a double. The guy that I always say was the toughest, only because I fought him eight times and we used to have pretty good scraps, that was was Terry O’Reilly with the Bruins.

In ’76-77 your only full year with the Kings, you had 10 goals in addition to the 232 penalty minutes. Previously you had scored 20 with the Flyers one year. Does it bother you at all that people only remember you for the fights and not some of the other skills you brought to the table?

Well, 20 goals is a pretty fair bench mark. The other years I averaged around nine or ten goals. I always wanted to make sure I got points. I didn’t want to just fight. For the most part, even after that, I always played on the third line. So, I got a regular shift. Everybody remembers all the penalty minutes, but I could play.

Any good stories about Marcel Dionne or Butch Goring from your time in LA?

I don’t know about stories. Marcel was our best player when I was with Los Angeles. Great Guy, great talent. He always played on a fairly mediocre team, unfortunately.  It’s a shame he never got an opportunity to win a Stanley Cup, to be on that caliber of a team.  Goring went on to have some great years with the Islanders. He was another guy who could really play too. We had some talent there in LA. We just couldn’t put it all together to go very far. That was the year we lost to the Boston Bruins in the first round. So, we made the playoffs

Next month the Kings will be honoring your first coach in LA, Bob Pulford…

What the hell for? (he laughs)

You tell me, what was it like to play for him?

I like Bob Pulford. When you know you don’t have a team that can go to the Finals and win it all, you still have to try and do your best. It’s a ‘win some, lose some’ situation, I guess. We had a pretty good team, particularly on the road. When we went on the road for a number of games we’d win more there. Then, we’d come home for like a five game home stand. We’d play well for a couple games and then by the fifth game we were ready to get out of town. But, he was a good coach and he went on to have a good career with the Blackhawks organization.


Little side story though, when he left for Chicago Ron Stewart came in as the coach. The owner of the team (Jack Kent Cooke), who liked to have a little bit of control of the team, was never in the state of California the whole time I was there. He was living in Las Vegas. George Maguire was the GM and they traded me to Pittsburgh. There’s nothing wrong with Pittsburgh, but who knows why they made that trade.

You once said that fighting didn’t come naturally to you, so you had to think about it and visualize things before a game. Can walk us through that process – how did it actually work?

The good players would get up for the game by envisioning themselves scoring goals, going around guys and playing well defensively. I did a little bit of that too. But, depending who we were going to play, who I might have to fight that night, I thought of that part also. I had a certain style, it was very simple and I’d think about it. I would envision myself beating the shit out of them. Sometimes I would lay there thinking and I would be losing. I would go ‘Wow, wait. Don’t think like that.’ So, I’d have to start over again. I used to think about it a lot – about who I was going to fight and envisioning me, obviously, doing quite well.

If there not going to take out the instigator rule, which I can’t imagine that they would…but, that’s what they need to do, is get rid of the instigator rule. I would bet most players, including Sidney Crosby, would like to see that rule disappear because then he could be protected. Right now, you’re going to get suspended. There’s no protection for the good players. A guy can give him a cheap shot, knock him unconscious or almost unconscious – give him a concussion – and he skates away. Again, he’ll miss a few games. If a player ever turned around after giving one of those cheap shots and he had to face a guy, they wouldn’t do it. First of all, it would probably be a guy about 6’6″, 250 lbs. Some of these guys are just huge now. There’s not much fighting that goes on (now) and when it does it’s kinda staged because players feel that’s what they’re there for and they think it’s a little bit of entertainment. I would have never, EVER said ‘You want to go?’ to a player. I didn’t want to go. What the hell did I want to go for? I would only go when I had to take a guy down after he gave one of my teammates a cheap shot.

So, probably the only staged fight you were ever involved in was when you refereed a pro wrestling match back in ’94.  How did that come about and what was the experience like?

It was the weirdest, craziest thing I was ever involved in. It was WCW at the Philadelphia Civic Center, which is no longer in existence. It was wild. I wore a Flyers jersey and I took a stick in. It was the Nasty Boys vs. Kevin Sullivan and Cactus Jack. They weren’t in the ring for the whole match. They were all over the place, breaking tables and smashing garbage cans. One of the Nasty Boys was going to hit the other guy with the stick I brought to the ring. I had to pull it out of his hand and hit him. So, I hit him as hard as I could and he couldn’t even feel it. It was just crazy.

Final question, Kings-Flyers tonight. Any predictions for a final score?

I’ll tell you what, Terry Murray and John Stevens have a pretty good club there in LA. Back in the day on those west coast trips we’d party a wee bit. But, we were a pretty strong team then too. You sort of thought it was a mini-vacation, but you still wanted the two points.  It will be a hell of a game this year. The Flyers are playing well. They’re a good team this year, very strong.  I’ll predict 3-2 in a shootout. But, I didn’t say which team will win. (he laughs).

Schultz hasn’t had an NHL scrap in three decades now.

I still wouldn’t fight him. Would you?